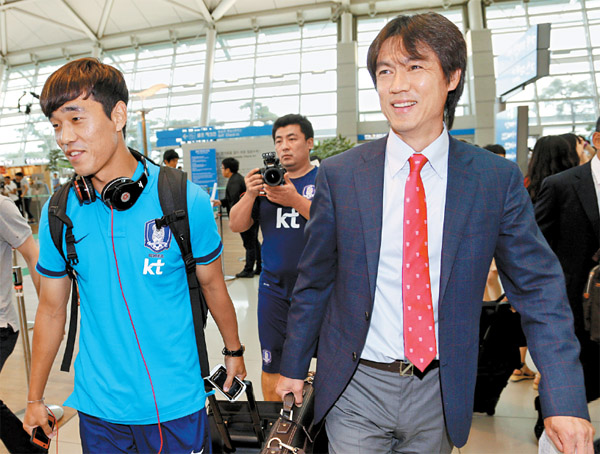 Korea’s Olympic football coach Hong Myung-bo said yesterday that he will use on-the-spot training in the United Kingdom to maximize his players’ capacity as the team left for London after a 2-1 victory in its final home tune-up match against New Zealand.

The team left for London yesterday afternoon to ready for its ambitious bid to win the country’s first Olympic medal in the sport.

Speaking to reporters, Hong said the players did better than he expected during Saturday’s friendly match with New Zealand, but still discussed improvements he hopes to see in London.

“The physical fitness has been pulled up at 90 percent of their maximum, the strategic coordination at 80 percent,” Hong said.

“We will try making up for the shortages during the remaining days.”

Park Chu-young, the striker of Arsenal who has been embroiled in controversy over military-dodging allegations, scored the team’s first goal against New Zealand in the 18th minute, celebrating his return from a 136-day absence in international matches.

The 27-year-old was recruited by Hong as one of three wild card players, or players older than 22 years of age, after he addressed the public last month.

Hong said Park played well, but was not as good as the striker can be. “It is up to us to lift his ability to the maximum,” Hong said.

Regarding the defense, arguably the team’s weakness, Hong said he will try imbue confidence into the team about their defensive skills. The back line was shaky against New Zealand, giving up several goal-scoring opportunities.

Defender Jang Hyun-soo was replaced in a hurry by defender Kim Kee-hee on Thursday due to an injury.

“It is true that our central defense isn’t playing at a confident level, and we will try to help the players have more confidence,” the coach said.

The team will have its final practice match against Senegal on Friday before taking on competition in Group B.

Grouped with Mexico, Switzerland and Gabon, Korea is scheduled to play Mexico in New Castle on July 26, Switzerland in Coventry on July 29 and Gabon in London on Aug. 1.

It is the seventh straight and ninth overall Olympic outing for Korea’s football team. With many players playing in Europe and Japan, Hong’s squad is seen as one of the highest quality groups in its Olympic history.

Korea broke through group competition at the Olympics twice: first at the 1948 London Games and then on the 2004 Athens Games, both reaching as far as the quarterfinals. The team’s goal at the 2012 London Games is to win a medal.

Koo Ja-cheol, a midfielder and captain of the team, said yesterday that he wants to experience Korea’s glory in advancing to the semifinals of the 2002 World Cup as a player during the London Olympics.

“Players have worked hard and I hope we have as good of a result,” Ki Sung-yueng, a midfielder for Scottish Premier League club Celtic, told reporters yesterday.

He said the Mexico match will be the most critical.

“If we do well in the game against Mexico, we can do the second game and third game well also. I will put forth all my efforts into the first match,” Ki said.

The 23-year-old midfielder is reportedly closing in on a deal to move to QPR, an English Premier League side that recently brought another Korean midfielder, Park Ji-sung, after his seven-year stint at Manchester United.

Kim, the defender newly joining the team, said he was happy to be selected.

“I want to practice so hard as to get melted in the team,” he said.