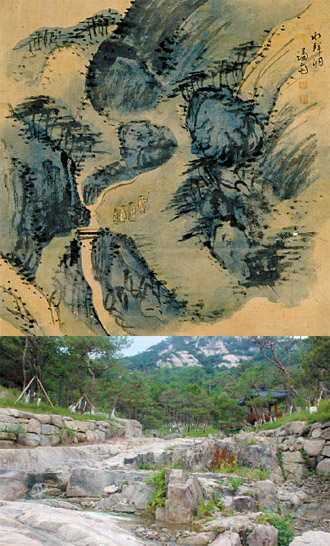 Top: A landscape painting by Jeong Seon. Above: The Suseongdong Stream in central Seoul. Provided by the government

Few were better at landscape paintings during the entire Joseon era (1392-1910) than Jeong Seon (1676-1759). While most landscape painters of the period sought to emulate those in China, Jeong - whose pseudonym was Gyeomjae - crafted a distinct and quintessentially Korean style.

Some art critics have even gone so far as to say the scenes in Jeong’s paintings are “more real and more beautiful” than the actual view.

Now Koreans will be able to enjoy a stream that was once the muse of this landscape master - the Suseongdong Stream in Okin-dong, Jongno District, in Mount Inwang.

The Seoul Metropolitan Government announced recently that it has completed the restoration of the stream and has opened it to the public.

The government discovered the stream and its historic significance in Korean history in 2010 when it began to demolish the 40-year-old Okin Apartment complex in the area.

The dilapidated apartment had raised safety concerns among the residents.

“Our main focus was restoring the rocks and other geographical features of the stream and its nearby area and create an area that can be an attraction in terms of history, ecology and culture,” said Lee Jeong-su, an official at the park and green department of the Seoul Metropolitan Government.

The Seoul government planted a total of 18,477 trees in the area around the Suseongdong Stream - most of which are pine and oak trees as depicted in Jeong Seon’s painting of the area.

It also constructed a “Samojeong” pavilion with limited dancheong (color decorations for traditional Korean wooden structures) in an attempt to portray simple and restrained lifestyles of seonbi (Joseon elites).

The jewel of the trip to the area would be to stand where Jeong presumably sat to work on his paintings. The Seoul government has marked the spot after consultations with experts.

“Suseongdong Stream disappeared during Korea’s development phase, but is now back to the Korean people,” said Choi Gwang-bin, the director of city’s park department.

“Along with the Seoul Fortress, we hope the stream will be a major attraction of Seochon [the area west to the Gyeongbok Palace].”