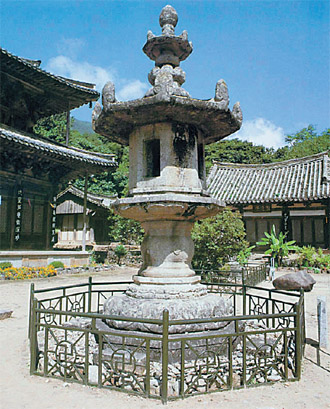 “Seokdeung,” the term attached at the end of the name of this national treasure, signifies a stone lantern. This lantern stands for the light of the Buddha, and so it is also called a gwangmyeongdeung, meaning a light lantern, and is usually set up in front of important structures such as a main temple or a pagoda. This monument stands in front of Gakhwangjeon, a hall of worship situated within the Hwaeomsa, the Buddhist Temple in South Jeolla. With a height of 6.4 meters (nearly 30 feet), it is the largest stone lantern in the world.

The stone lantern is structured with hwasaseok, the ignited part on the upper part of the lantern. Instead of the common octagonal pillar, this lantern possesses a unique center pillar with an hourglass shape. This hourglass-shaped center pillar was popularly utilized in the Honam Province during the United Silla Dynasty and thus, this building is the most typical form of lanterns from back then.