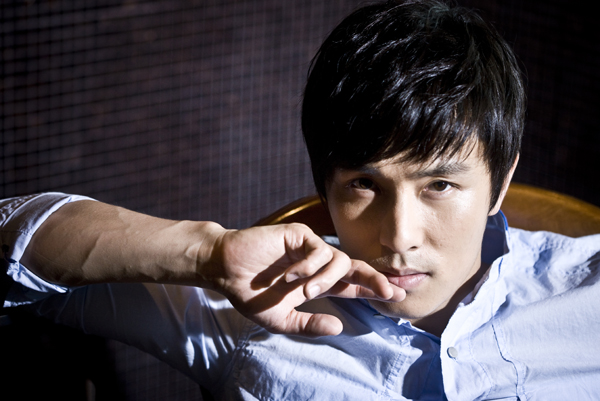 Though his first film flopped, Shinhwa’s Kim Dong-wan proved critics wrong with “Yeongasi,” which beat “The Amazing Spider-man” at the box office on debut weekend. “Yeongasi” tells the story of two brothers desperately trying to discover the source of a parasite that drives human to suicide. By Kwon Hyuk-jae


The newly released Korean disaster film “Yeongasi” is the talk of the town, as it attracted more than 1.1 million viewers during its first box office weekend between July 6 and 8, topping even Hollywood blockbuster “The Amazing Spider-Man.”

The success of the film wasn’t always so certain, especially when Kim Dong-wan, 33, a member of Shinhwa but an inexperienced actor, joined the cast. Even fellow cast member Kim Myung-min, 40, voiced concerns about his colleague, who he feared might have trouble on the big screen.

But as shooting began, Kim Dong-wan worked hard to prove himself, assiduously studying his character to earn the approval of his colleagues, and later, audiences.

In the film, Kim stars as Jae-pil, a detective agonized with guilt for squandering the wealth of his brother Jae-Hyeok, played by Kim Myung-min, through a bad stock recommendation. But in a bizarre twist, a parasite epidemic gives the two a chance to bond. Together, they look for the source of the bug, which drives infected insects to the water so that it can breed, but leads to suicide when humans are infected.

The JoongAng Ilbo sat down with Kim Dong-wan recently to discuss his big break in the movie business as well as his thoughts on the unconventional horror-adventure film into which he put so much effort. The interview also touched on his roles as a TV host and K-pop idol.

A. When filming “Spin Kick,” I only thought about myself. I exercised alone to build my muscles and I read the script alone to practice my lines. I later realized that team-work is of the utmost importance in filming a movie. This time, I’ve learned a lot from the directors and actors, getting along quite well with them.

There must have been a lot of pressure on the set of this new film.

Indeed. Otherwise I wouldn’t have started smoking again. If the film had failed at the box office, I knew I’d be up for criticism. People would have blamed me for the failure, and so I put every effort into my role for this film.

How did you prepare to play an actor with such a broken character?

I visited crime scenes with a detective who graduated from a college of theater and film. He showed me that adjectives like “fashionable” and “cheerful” could actually be applied to detectives, and so even though my character is different, I learned not to stereotype his personality. I also learned from Al Pacino’s detective roles because he is of a slight build - similar to my own.

Do you look back at any particular scene with regret?

The fire scene. Kim Myung-min prepared a lot for the scene, but I was sort of absentminded at that time and ended up having to do the scene again later. I should have prepared more thoroughly for the first take.

In your television show “Shinhwa TV” you play a very different role as a laughing stock of sorts.

On that show we just forget the camera is rolling when we’re playing around with each other. We often have a difficult time watching the edited shows ourselves because of our antics. In the MT episode [aired on June 30], there’s even a scene where we all take turns farting.

How does that show differ from “Infinite Challenge”?

We don’t have a host. We don’t have a leader. So, we do almost anything we want. Choosing to work with JTBC was in line with this goal, too, since we didn’t want to simply mingle with other celebrities. Just being with each other reveals our natural character. Min-woo is the silly one and Eric is the wild-eyed one. I’m the lax one.


Shinhwa is often called the ancestor of idol groups. How do you feel about that title?

We never expected to come this far. At first, we thought we’d be lucky to release a second album. Now I can safely see that we’ve been to the top.

Through all the ups and downs, though, our motivating mantra was “Who cares if we’re on top or not? Let’s just all be happy.” I think that attitude brought us to where we are today.

Now, we’re really a team. I’m only fully myself when I’m with my fellow group members.

One member quickly moves to fill a gap made by another who might be having a bad day. And this happens even before most of us notice.