Analysts reborn as hunters and hosts

Analysts reborn as hunters and hosts

Kim Mi-yeon, an “education analyst” at Eugene Investment & Securities, gives a lecture on preparing for college admissions to parents in Seoul on June 26. Analysts like Kim are differentiating themselves by approaching potential investors directly, rather than the other way around. Provided by the company

Traditionally, analysts at securities firms are frantically analyzing industries and hammering out reports on market outlooks to keep investors up to scratch, but as more securities firms saturate the local market, these busy bees are striving to differentiate themselves by approaching potential investors directly.

Industry insiders say securities firms that are scrambling to stay afloat due to the decelerating economy are bolstering the trend by encouraging their analysts to come up with creative strategies to expand their customer bases. 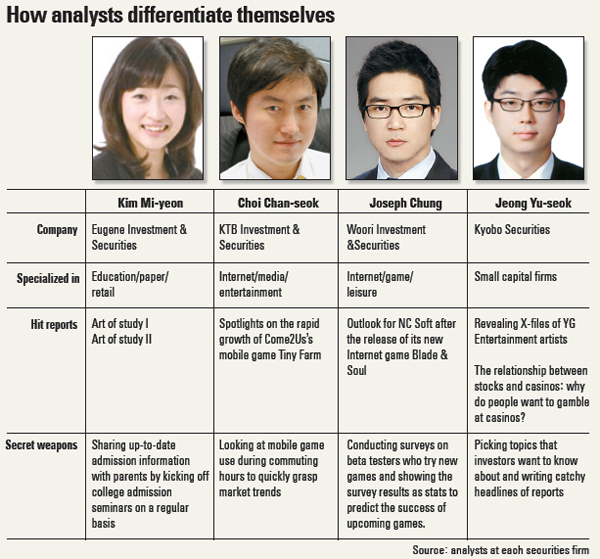 The beauty of sharing

This was demonstrated one recent afternoon when an expert on education was giving parents in Ulsan tips about their children’s college admissions.

“My son is in seventh grade, but would sending him overseas for a year to study help him get into a foreign-language high school. And later, will he be able to gain admission to a prestigious university in Korea?” one parent asked.

It has now become common at so-called college-prep seminars to see parents busily scribbling down notes while a securities analyst on the education beat pours forth their advice from the podium. Not so long ago, that job would have been taken by a private academy teacher or owner.

“Parents should put more of a priority on helping their kids get on the right career track by studying what motivates them,” said Kim Mi-yeon, an education analyst at Eugene Investment & Securities.

The two-week series of seminars that started towards the end of last month was free of charge and targeted parents in Seoul, Busan, Gwangju and Ulsan. The response was positive and 1,000 parents attended, the company said.

Eugune said it is not common for securities firms to host such a grand-scale series of seminars on the college admission process, but it plans to repeat the exercise next year.

“It’s a win-win situation,” said Kim Sun-young, a publicist at Eugene. “Analysts get a chance to add to their portfolio, and securities firms raise their brand awareness and attract new customers, who can benefit from accurate, unbiased and fresh education tips from experts.”

Choi Chan-seok, an IT analyst at KTB Investment & Securities, said his magic formula is to test all of the new games on mobile devices during commuting hours and at weekends before they hit the shelves. He even completed the notoriously difficult Diablo III, an action role-playing game by Blizzard Entertainment that has sold off the charts in Korea.

“My colleague, who never plays computer games, fell in love with a title by Come2Us called Tiny Farm after he got smartphone,” Choi said. “I also tried it, and it was very fun. A title’s success on the mobile-gaming platform really depends on whether its rules are easy to understand for both male and female gamers. Basically, it needs to be fairly easy to play. So after demo-ing this game, I figured it could be a hit [and the company was therefore worth investing in].”

In a report penned in May, Choi gave the game developer a bright outlook. Shares of the company surged to 44,000 won ($38) this week, after hovering at around 25,000 won in May.

“Traditionally, analysts analyzed stocks and trends that the market was already aware of, but now they’re looking harder for hidden gems to lure new investors,” said an industry source.

Joseph Chung, an IT analyst at Woori Investment & Securities, said he reaches out to people who beta-test new titles to get the first and fastest reviews on the market.

Previously, he conducted online surveys of Internet and mobile gamers’ thoughts on new titles on his reports because it was hard to have face-to-face meetings with beta testers, who usually keep a low profile. This time round, however, Chung managed to get in direct contact with a number of testers who had played NC Soft’s Blade & Soul before it came out.

“Games are like movies in the sense that not all movies can be successful at the box office, even if they are interesting,” Chung said. “In order to provide accurate information, analysts need to be able to better quantify what’s happening in the industry. Surveys are often the best method, as they can use these to predict the fate of new games.”

Jeong Yu-seok, who specializes in small capital firms at Kyobo Securities, said analysts should also play a traditional editor’s role when crafting their market reports, jazzing up their headlines and generally perking up the copy to catch investors’ eyes.

Jeong created a buzz in February when he released a report titled “Revealing the x-files of YG Entertainment artists,” which calculated the company’s estimated sales for 2012.

He recently wrote a report explaining “the relationship between stocks and casinos: Why do people like to gamble at casinos?”

“We’re now in an era where analysts must pick topics that investors have an appetite for, and write catchy headlines to draw their interest,” said Jeong.