For tech-heavy K9, how new is new?

For tech-heavy K9, how new is new? 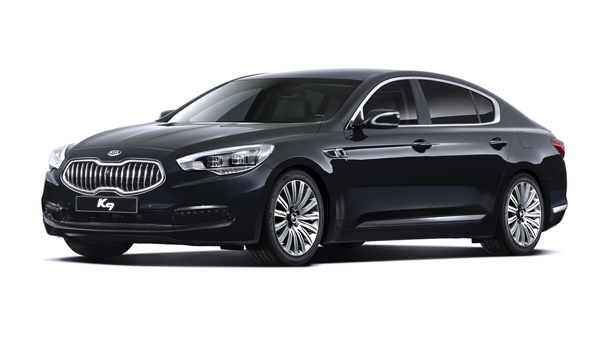 On May 2, Kia Motor revealed its new sedan K9 to the world. It was the company’s first full-size luxury sedan since its Enterprise came out in 2002 and the first rear-wheel-drive model in more than a decade.

Korea’s second-largest automaker already revealed what it wanted from the K9 even before the official introduction: to stir the luxury sedan segment in the domestic market, especially against European giants like BMW and Mercedes-Benz.

“The K9 is a clear signal of our intention and determination to compete head-to-head with the European luxury brands,” said Peter Schreyer, chief design officer at Kia Motors, during a press conference in March.

One of the marketing strategies that Kia carries out is to emphasize the fancy technologies that it has implemented in the K9 and compare these with competing premium models such as the BMW 7 Series and Benz S Class.

According to Kia, it took four years and five months to develop the K9 at a cost of 520 billion won ($450 million). Most of the latest auto technology that can be commercialized by Hyundai Motor Group is in the vehicle.

In its official sales guide, Kia said nine new technologies have been installed in the K9.

Others, like its UVO (telematics system) DIS navigation and 12.3-inch full-size color TFT-LCD screen are related to IT and multimedia functions.

Kia claims some of these technologies are better than its competitors, but according to local auto enthusiasts and pundits, some are already seen as being old-fashioned by other car makers, making them doubt the K9’s claims of having “new technology.”

For the radar-based BSD, pundits say Volvo first used a similar system back in 2005. The technology uses cameras placed in the car’s side and rear-view mirrors to take snapshots, which are then processed by a computer to recognize approaching vehicles and warn the driver when he attempts to change lanes.

Other automakers, like Mazda and Infiniti of Japan, have also launched this technology in some of their models in the past. Even the K9’s competition, the BMW 7 Series, also has this technology, according to BMW Korea.

Kia claims that even though it is used in other luxury vehicles, the K9 warns drivers in better and more elaborate ways. It first uses the warning lights on the side mirrors and on its HUD, then shifts to acoustic warnings and vibrations on the driver’s seat. Meanwhile, the K9’s shift-by-wire gearstick is nothing to write home about, according to car experts.

The system, which facilitates the shifting of gears via electronic signals rather than mechanical links, was first commercialized by BMW in the early 2000s. Kia was earlier criticized for copying BMW’s design on certain internal elements, with a number of foreign auto magazines referring to the K9’s “BMW-alike gear lever.”

The Kia’s HUD and AVM technologies are also not the latest available on the market.

The former, which was originally developed for use in fighter jets to provide the pilot with data, is now a common function among luxury cars. BMW commercialized it back in 2003, while other automakers such as GM, Lexus, Audi, Saab and Nissan are already using it in their cars.

Kia claims that the vividness of the HUD, which has 65,000 colors, is better than that of any of its rivals. It also claims the content that can be displayed is more diverse than that available for the BMW 7 Series, while the Benz S class doesn’t even have such a system.

For around-view-monitoring, which lets drivers see all four sides of the vehicle through cameras, the technology was first introduced by Nissan in 2007 in its Elgrand minivan. It can also be spotted on some Land Rovers and Hyundai’s Grandeur (known overseas as the Azera). But the K9 tech offers more comprehensive 360-degree views, compared to just 270 degrees on BMWs.

Critics rate highly the adaptive front lighting system, claiming it trumps the BMW 7 Series and Benz S Class as the K9 equips both its high and low-beam headlights with LEDs.

The car’s advanced vehicle safety management system, which includes a smart cruise control system and pre-seat belt - which automatically tightens if the threat of a collision is raised - are among its other notable highlights.

Industry experts say the K9 shows how far Kia has come in terms of its technological prowess, but that it requires more time to catch up with the world’s top premium car makers.

“Although the K9 is equipped with luxury additions and ‘new’ technologies, it hasn’t caught up with the world’s top luxury brands yet,” said a dealer at a foreign carmaker in Seoul.

“Instead of just trying to overload it with all the latest convenient features, Kia should have come up with its own Korean-style luxury car.”