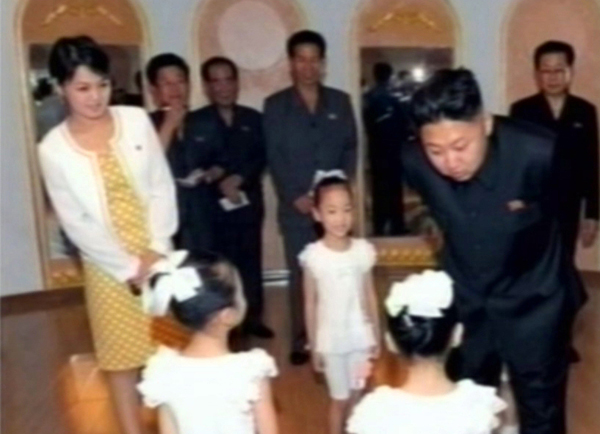 Speculation is rife over the identity of the female companion of North Korean leader Kim Jong-un shown in the photo released yesterday. [YONHAP]


North Korean leader Kim Jong-un stepped out with the same woman who accompanied him to two other events earlier this month.

The attractive woman’s third public appearance fueled speculation that she could be the wife of the young leader of the communist regime.

North Korea’s Korean Central Television released still shots of Kim meeting children in a kindergarten in Pyongyang accompanied by the smiling woman in a yellow dress, a white jacket and high heels.

It was the same woman shown in pictures and video clips sitting next to Kim at a musical performance in a Pyongyang theater earlier this month. The performance also got noticed for featuring Disney characters such as Mickey Mouse, which the American company said it hadn’t authorized.

Another video clip released by KCTV on July 8 shows the same woman in a black suit walking a few paces behind Kim and top military officials paying tribute to Kim Il Sung, North Korea’s founder and the young leader’s grandfather, on the 18th anniversary of his death in Kumsusan Memorial Palace in the North’s capital city.

In the latest photos of the visit to the kindergarten, the woman stood a few steps behind Kim, while high-ranking officials, including Jang Song-thaek, vice chairman of the National Defense Commission and Kim’s uncle, were behind her.

Analysts have different theories about the identity of the woman.

Some claim she is likely to be Kim’s younger sister Kim Yo-jeong, known to be 24, who is reported to have studied in Switzerland along with Kim in the 1990s.

Several South Korean officials have suggested the woman could be Hyon Song-wol, a formal vocalist of the Bochonbo Electronic Music Band. South Korean intelligence officials believe the two became romantically attached about a decade ago when Kim returned home from his studies in Bern, Switzerland.

Pyongyang’s first ladies have had largely remained in the shadows. One exception occurred in June 1994 when Kim Il Sung let his second wife be photographed while he met former U.S. president Jimmy Carter in Pyongyang to resolve a nuclear crisis.

Pyongyang has yet to issue an announcement on the woman. At the Asean Regional Forum held in Cambodia last week, Pyongyang’s Foreign Minister Pak Ui-chun evaded questions from reporters as to whether Kim Jong-un has tied the knot, and suddenly canceled a scheduled press meeting.