This fake designer bag turns into a genuine steal

This fake designer bag turns into a genuine steal 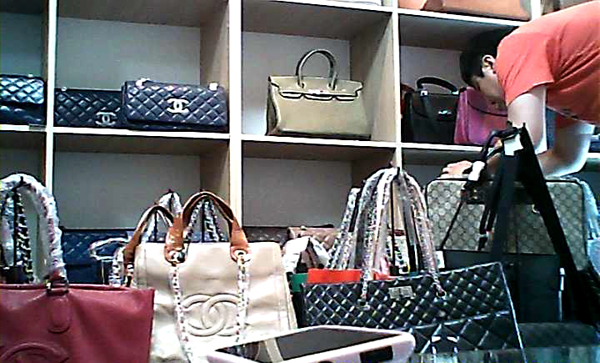 A seller shows counterfeit designer goods in an officetel building in Oksu-dong, central Seoul. Luxury fake handbags including Chanel and Hermes are displayed. By Kwon Sang-soo

*Dear readers, it is true that this story covers about fake designer goods in Korea, but it doesn’t mean that the reporter can be a broker or middleman who can hook you up with the actual seller. Please do not send any e-mails seeking for the seller’s phone number.


I am waiting in a basement parking lot of an officetel building, which combines both commercial space and small residential flats, in Oksu-dong, Seongdong District, central Seoul. It’s the kind of building you’d drive by without any notice.

My iPhone rings. A thick voice asks: “Have you arrived?”

I say that I’ve parked my car on the B3 level, as instructed in advance. “Which room are you in?”

The stranger doesn’t answer. “Get in the elevator in two minutes,” he commands.

My companion and I wait for exactly two minutes. The elevator opens. In it is a man in his late 30s to early 40s holding a Louis Vuitton wallet.

“What are the last four digits of your cell phone number?”

I reply. He checks the call record on his phone.

I introduce my companion, who’s playing the role of a girlfriend crazy for luxury designer goods. She’s wearing a pink tank top and black Abercrombie shorts. The stranger seems to approve. He pushes the button for the 9th floor.

“I hope they have a Goyard bag,” my pretend girlfriend says.

The elevator door opens and we walk down a corridor to a steel door. Our host punches in an access code and swings open the door.

“We have everything,” he says.

Koreans are crazy for luxury import brands that scream wealth, class and status, from the sleekest Mercedes-Benz to the latest Chanel couture, not to mention the high-end designer handbags and watches affordable to an even broader range of social-climbing consumers.

Koreans like to be seen wearing the fancy goods, carrying bags with the logos - and they also don’t mind skulking around like thieves in dingy lanes and parking basements to get their hands on counterfeit luxury brand items that sell for a fraction of the cost of the authentic items.

That’s what I’m in search of: Prestige at a steep discount.

What I discover is that in Korea, finding top quality fake luxury goods takes just a little bit of time and effort, and leads to more than just an eye-popping watch or impressive handbag on your arm for very little money.

So over the top is the market for luxury goods in Korea that my purchase of a fake isn’t just a retail-therapy indulgence or a rip-off of someone else’s brand. It turns out to be a mighty fine investment as well.

According to the Korea Customs Service, the domestic market for luxury designer apparel and leather goods is about 5 trillion won ($4.39 billion), more than the value of imports of 10 imported car brands (including Mercedes-Benz, BMW and Audi), which reached 4 trillion won last year.

The domestic market for counterfeit luxury apparel and leather goods is undoubtedly larger. Last year, the customs service confiscated nearly 1.5 trillion won worth of counterfeits illegally imported from overseas locations such as China and produced domestically. The confiscated goods are dwarfed by the goods that get through and are sold, analysts say.

Korea has a long history of producing fake goods, from phony Pierre Cardin suits in Myeongdong in the 1970s, to counterfeit Nike and Adidas products in the 1980s, and ultimately to the very finest fake scarves and luxury bags found anywhere in the world.

“Counterfeit producers set up small factories with three to four engineers in metropolitan areas such as Sinwol-dong, western Seoul, and Wolgok-dong in northern Seoul, and areas in Gyeonggi,” according to Jeong Shin-soo, who has been chief counterfeit investigator for the Korea Customs Service since 1999. “They used to sell their bags and wallets in Dongdaemun.” Korea’s crackdown on intellectual property rights piracy eventually pushed production abroad to places like China and Vietnam, although Korean engineers were needed to keep the quality high.

It’s easy to find counterfeit brands in Dongdaemun, Itaewon or Myeongdong, but those are the low quality goods. The most demanding customers - Korean office girls and housewives, wives of diplomats and foreign businessmen - have their own private sources for the very finest fakes on the market. That’s what I was looking for.

It wasn’t easy. The vendors of the good fakes keep their businesses highly secretive. I appeal to a friend who has a friend and so on and so forth. Finally I get a number to call.

I say I’m looking for a watch.

“What’s your friend’s phone number?” asks the voice on the line. I give it. “Wait a minute please.” About a minutes later, he came back on the line. “Okay the number is verified. What time do you want to visit?” I make an appointment for that afternoon.

“I will text you the address within 30 minutes. If you don’t get the message, please call us back.”

Exactly 13 minutes later, I receive a text message with the officetel address. “Park your car on either B3 or B4 level of the parking lot and give us a call about 30 minutes before your arrival.”

Since the vendor is being so cloak-and-dagger, I decide to follow suit. I go to an electronics store and buy a spy camera hidden in a case that looks exactly like the smart key of an automobile. I carry the spy camera atop my wallet and it videotapes my entire 45 minutes in the officetel apartment.

“Take your time,” says the vendor as he opens to the door to the apartment for me and my companion. “They’re all yours!”

The sight before us is pretty amazing: A 12-pyeong (426-square-feet) area with about 300 to 400 fake designer handbags, wallets and travel bags. The brands include Chanel, Hermes, Louis Vuitton, Gucci, Goyard and Balenciaga. On the window side of the room are about 10 different brands of watches such as Hublot, Breitling, Mulberry, Rolex, Chanel and IWC Schaffhausen.

“Oh my God!” my supposed girlfriend exults. “Look at these babies!”

She’s playing her role well. “Do you have another color for this Louis Vuitton bag?”

He opens a built-in closet stuffed with merchandise. “Are you looking for white?”

I put the running spy camera on the table with my wallet.

The vendor appreciates my companion’s enthusiasm and would like to see more from me. “Want a bottle of Bacchus?” he asks, offering a local energy drink.

“I’m here really for my girlfriend.” I gesture in her direction. “And I don’t really know the difference between ‘A class’ imitations and the cheap counterfeits because I’m not much of a shopper. But I kind of like this Breitling watch.”

I get a fast education. The grades of counterfeit products range from B, A to “special A.”

“In the past, all the high quality imitations were produced domestically, and all the crappy goods were imported from China,” our host tells me. “But due to the police crackdown, that has flip-flopped. The stuff you see on the sidewalks in Itaewon and Myeongdong are A or B class goods that are produced domestically.”

Meanwhile, the engineers who know how to make perfect copies of luxury goods have moved to China. “All of ‘special A’ goods are being imported from China to Incheon or Busan port,” he says. Zuhai is the manufacturing center.

My vendor has been in the business for eight years. He meets three to four of his regular brokers at hotel rooms, and they offer him his choice from among 500 pieces of goods. He selects about 300 on average. All the goods are sold within a month or two.

I ask how he escapes being caught by the police.

“I move the store every three months,” he says. “There are only a limited number of sellers who set up stores in an officetel building like me. And I sell online or hire touts to attract customers.

“I have about 2,000 regular customers and all of them are introduced by customers who have previously visited my store. I always verify their phone number as I did yours.”

“I like this one!” My companion has chosen a white Goyard St. Louis tote bag that sells for nearly 2 million won in Korea. She carefully examines its construction, sewing and logo, and strikes a pose in front of a full-length mirror. “No one will recognize this as an imitation,” she laughs.

I pick a Breitling Navitimer 01 watch that is currently on the home page of the brand’s Web site. It sells for 9.75 million won at the Lotte Department store in Myeongdong, central Seoul.

I pay 100,000 won for the Goyard bag and 150,000 won for the watch. The sales are cash only - no credit or debit cards are accepted. The vendor opens a drawer filled with hundreds of watches wrapped in fancy blue velvet and pulls out my model.

While he sets my watch, I ask him if he has ever been caught by the police.

“I was recently actually,” he laughs. He says he was one of the brokers who was caught by the customs service recently. On June 21, the Korea Customs Service said they caught a ring that had been smuggling in luxury designer goods since January 2010. About 24,000 pieces of leather goods and watches were confiscated, and the customs service said it was one of the largest smuggling busts ever.

He settled very quickly. “I stood before the court and was sentenced to pay a 300 million won fine,” our vendor says with impressive sang froid. “I was damaged a bit, but I think I can make up the losses soon.”

Our shopping is done. My watch is in a red velvet fabric covered box, and the Goyard bag is in a brown shopping bag with a “G” logo in Roman lettering. “If you find any defects, we will replace the products with new ones,” he says. “Just ship them to the address I gave you. Thank you for coming and I’ll text you when I have a new collection.”

I feel satisfied and my faux girlfriend is ecstatic with her Goyard bag. “My God, sis,” she says over her phone, “this is the best quality I have ever seen. Don’t worry. I’ll give you his number.”

But our evaluation is purely amateur, and I want an experienced product authenticator to tell us how we’ve done in her counterfeit shopping.

My companion recommends a store in Apgujeong that sells and buys used designer goods. It has about 10 branches nationwide. Normally, they want to see original tags from the product and a serial number, she says.

When we enter the store, an attractive staffer in a black uniform greets me warmly. I admit that I’m looking to sell a counterfeit bag.

“It will take five to six days to estimate the price, sir,” she says.

“We mostly take originals,” she explains. “But as more and more of our customers have been asking about counterfeits, we began to take them. We inform customers that the goods are imitations. Actually they’re as popular now as the originals.”

Five days later, I get a call from the shop offering me 150,000 won for the Goyard bag, a 50 percent higher than what I paid.

I turn down the offer and give the bag to the girl who played my girlfriend. The following day, I received a text message on my phone from the counterfeit vendor.

“2012 Chanel collections, ‘special A’ class new Hublot watches, and all new Prada wallets are in!” it reads. “Hope to see you soon!”