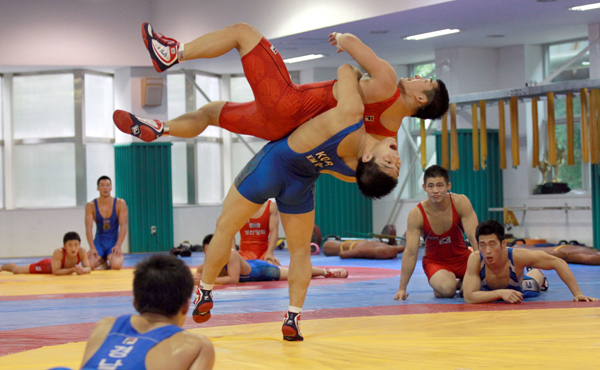 
Desperation can be a double-edged sword for athletes. It can catapult them to greater heights, but it can also put extra burden on their shoulders and crush them in the heat of battle. The ability to channel that desperation into focus and determination can be a key to athletic success.

At this month’s London Olympics, Korea will pin its wrestling medal hopes on three Greco-Roman wrestlers, each one desperate for different reasons.

Jung Ji-hyun, the 2004 Olympic gold medalist in the 60-kilogram (132-pound) class, can hardly wait for the chance to redeem himself after a disappointing run at the 2008 Olympics. For Choi Gyu-jin, in the lightest division at 55 kilograms, the possibility that his first Olympics could also be his last drives him despite a serious knee injury. Kim Hyun-woo, contending for the 66-kilogram title, is desperate to prove he is not just a brash young wrestler with no skills to back his fancy moves.

Jung, 29, will be going to his third Olympics. In his previous two, he experienced both a dizzying high with the Athens victory and an embarrassing low by being eliminated in the quarters in Beijing. Jung said that defeat to Nurbakyt Tengizbayev of Kazakhstan four years ago, which relegated him to ninth place, still gnaws at him.

He edged Tengizbayev in the first period, 2-1, and was leading the Kazak 2-1 in the second period with five seconds left. If he had held on, the Korean would have advanced to the semis. With the two-time Olympic gold medalist Armen Nazaryan eliminated in the quarters earlier, Jung would have had a clear path to the top.

But Tengizbayev surprised Jung with a quick shoulder throw for two points, taking the second period 3-2 and sending the contest to the decisive third period. Momentum fully on his side, Tengizbayev won the third period 2-0 and took the match.

“I lost that one in those final five seconds [of the second period],” said Jung, taking a break from the morning practice session on a humid July day.

“In the four years since, all I’ve been thinking about is redemption. I know this will be my last Olympics because I am not getting any younger and my body won’t hold up.”

Choi is trying to make sure his body can stay strong until the Olympics. The 2010 Asian champion tore his anterior cruciate ligament in his right knee in February. It’s an injury so severe that it often keeps athletes on the mend for several months.

But Choi, 27, has not stopped training. He said he takes extra caution on the wrestling mat that can get slippery with sweat during training. By going under the knife after London, he will put his post-Olympics career in jeopardy.

“The knee hasn’t been a big problem so far,” Choi said, with his right knee heavily wrapped. “I try not to put too much strain on the leg, or I could make it worse. But at the same time, I want to participate in every component of our training.”

Choi said he never harbored any Olympic dreams until he became a national team fixture in the fall of 2008. As he built experience, he set his sights on the biggest prize of them all.