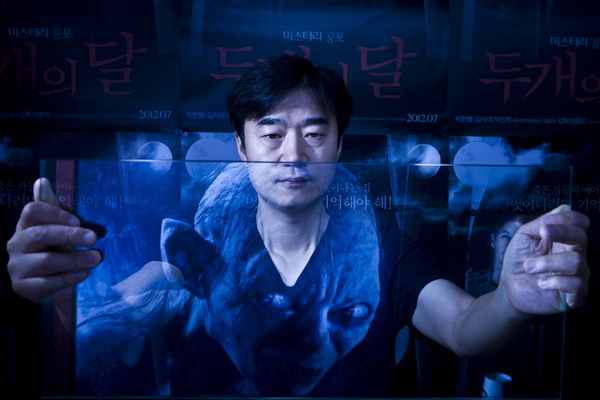 Lee Jong-ho was a bank clerk and documentary producer before becoming a horror story novelist. Now, he has his own horror film production company. By Kwon Hyuk-jae


After two decades of writing horror stories, novelist Lee Jong-ho has turned a page and entered the scary world of film production.

The movie, directed by Kim Dong-bin, centers around a university student Seok-ho (Kim Ji-seok), high school girl In-jeong (Park Jin-joo) and a horror story writer So-hee (Park Han-byul) who find themselves trapped in the basement of an isolated house in the middle of a forest.

Not knowing what they were doing there in the first place, their anxiety multiplies with the appearance of a mysterious woman Yeon-soon (Ra Mi-ran) who keeps mumbling the words, “A killer is here.”

Lee, who did the screenplay for “Two Moons,” is the author of such horror takes as “Bunshinsaba: Ouija Board,” “Fluid Movement,” “House of Omen” and “If.”

Q. What was the reason for establishing your own film company?

A. I had been writing horror stories for almost 20 years, but I kept hearing that it was too difficult to actually cinematize them due to their complicated reversals and compositions. So I decided to set up a company with experts who specialize in this field to create a whole different style of horror movie.

Does that mean previous horror movies were too boring?

They were always focusing on revenge and malediction. After using the cell phone as a horror fixation in “Phone” (2002), there was inactivity within the horror movie industry. There should be more movies that switch between reality and fantasy and use reversals and new ideas.

Part of the apparatus and setting can’t be similar to existing horror movies. Nevertheless, the question that should be asked is whether there are several sides to the reversal. Nobody really knows why So-hee doesn’t eat her bibimbap, or a Korean dish of rice with mixed vegetables, while Seok-ho and In-jeong do, but when that scene is replayed later on in the movie, the audience can understand the truth behind it.

There is a lack of explanation for Yeon-soon’s insanity. Why?

That’s because the director cut a lot of the scenes where the past of Yeon-soon is shown, which includes the mass suicide of her family. He claimed that the scenes were overly descriptive. The movie “A Tale of Two Sisters” also lacked some clarification, but because the logic within the story was clear, the audience approved of it.

There is a saying that the reason why horror movies are not shown as much as before is that our lives are dreadful enough. Do you think that is true?

I do hear that horror story writers berate themselves by saying that they have nothing much to write because so many terrible cases happen these days. That’s why horror movies should be focusing on entertainment, not sending a message about the society. They should try to blend with other genres as well, just like the popular romance-horror movie “Spellbound.”

Why are people attracted to horror?

First and foremost, human beings are generally frightened of the fact that one day their lives are going to come to an end. I think that people enjoy risky activities, like the roller coaster or bungee jumping because they want to challenge death. The genre of horror is like the string that is attached to one’s ankle at the time of the bungee-jump: it guarantees the protection against the possibility of death.