Vets’ descendents get the chance to experience Korea

Vets’ descendents get the chance to experience Korea 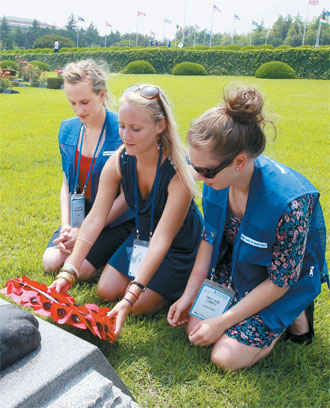 Christine Thomas, center, from South Africa, places a wreath in memory of her grandfather’s comrades at the United Nations Memorial Cemetery in Busan on Thursday. “Now I feel relieved, like I have completed my mission,” she said. “My grandfather would be happy.” By Song Bong-geun

They came from Thailand and Turkey, from the United States, Colombia and 11 other countries.

The young people had many differences but one thing in common: Each was the grandchild of someone who fought in the 1950-53 Korean War.

Last Thursday, they gathered for a moment of silence at the United Nations Memorial Cemetery in Busan, the final resting place of 2,300 UN soldiers.

From July 8 through Saturday, 147 students participated in the “UN Peace Camp for Youth 2012” sponsored by the Ministry of Patriots and Veterans Affairs.

Christine Thomas, an 18-year-old from South Africa, brought a wreath of red flowers that her grandfather, 85-year-old Peter Thomas, a Korean War veteran, had sent to her from the United Kingdom.

She placed the wreath in front of the U.K.’s marble lion monument in memory of 31 Independent Commando Royal Marines, her grandfather’s comrades, who were killed in the war.

“Now I feel relieved, like I have completed my mission,” she said. “My grandfather would be happy - he wanted me to take a picture and send it to him.”

Three years ago, her older sister made the same trip, participating in the first UN Peace Camp. “I was jealous she got to go, but here I am now. My grandfather told me about his time in the war, and I learned about the Korean War in high school. But the whole experience at this camp has put everything into perspective and made it more immediate,” she said, after laying the wreath.

Like Thomas, many of the students were encouraged by their grandfathers to participate in the trip, supported by the Korean Veterans Ministry.

Students had to have a parent or grandparent who was in the war and most paid half of their own airfare.

The young people walked around the cemetery in search of soldiers from their countries.

Some stood before the Wall of Remembrance on which the names of all of the 40,896 UN soldiers who fell during the Korean War are engraved.

One from the United States found the name of his grandfather’s best man, who was shot in the head during the war.

Aikaterini Diamantopoulou, 19, from Greece joined the camp at the request of her grandfather, Theodoros Theodorou. Theodorou visited Korea in 2005 and was impressed by how developed the country had become.

“My grandfather thought it was a miracle to see a country recover and become one of the most powerful countries in the world in 60 years,” she said.

Accompanying the students were group leaders, including Sunny Lee, 60, of Utah. She flew in to Korea with 10 students and has been part of the UN Peace Camp since it began.

Previously she was involved in programs to American war veterans to Korea.

During the Korean War, Cedar City in Utah sent 600 soldiers to South Korea and, miraculously, every one of them came back alive.

“But these grandfathers lived with the lifelong guilt about killing someone’s son or brother and many suffered from post-war trauma,” said Lee. “There was one wheelchair-bound man who after retirement suffered from depression and barely spoke. Whenever he heard any news about Korea on the TV, he turned it off.”

His daughter at that time encouraged him to revisit Korea and his memories, so four years ago Lee helped to organize a trip for the 30 remaining Cedar City war veterans.

This in turn led to Cedar City to become sister cities with Gapyeong County in Gyeonggi, the site of the Battle of Kapyong, April 22-25, 1951.

“When the man came back, he spoke enthusiastically to his daughter, stating he was amazed at how beautiful Korea was and how good the people were.”

Before Lee left for the UN camp, she got a telephone call from the man’s daughter, who said her father had died, peacefully, two months earlier.

Lee retired from her business 10 years ago to dedicate her life to volunteer work. Every year since 2009, she has selected and accompanied students from the United States, including the grandchildren of veterans she has become close friends with, to participate in the peace camp.

After the trip to the cemetery, the students enjoyed some sightseeing in Busan and spent time at the beach.

Over the course of the week, the young people also made a trip to the Demilitarized Zone and War Memorial of Korea, and spent a day of military training at a special forces unit in Biho, Songpa District, southern Seoul. They also visited the Yeosu Expo in South Jeolla.

“One of the goals of the camp is to show appreciation to the veterans,” said Lee Eun-jin of the ministry’s veteran policy division and the peace camp leader. “It is our hope that these students can, through their grandfathers’ legacy, forge a positive relationship with Korea in the future.”

*Kim Ye-jin contributed to this article.