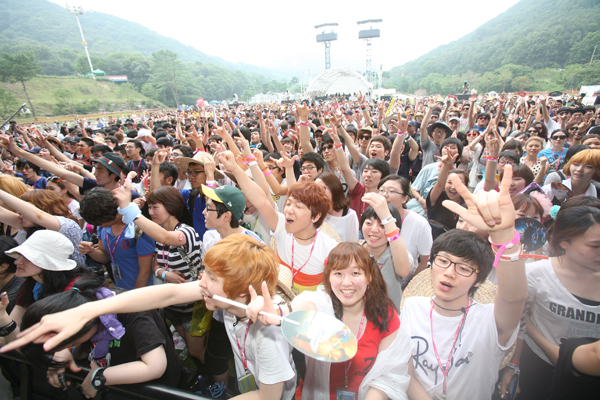 Fans crowd in front of the main stage of Jisan Valley Rock Festival last year. The festival, the biggest of its kind in Korea, will feature performances by Radiohead, The Stone Roses, Elvis Costello and the Imposters from July 27 to 29 in Icheon, Gyeonggi. Provided by the festival

The Triport Rock Festival, Korea’s first international rock festival, was one for the books. In fact, the two-day music extravaganza in the summer of 1999 never fully took place. 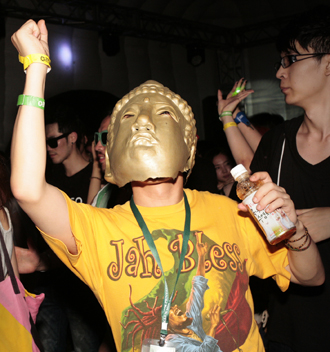 “The worst typhoon in Incheon’s history hit and the precipitation was around 350 millimeters [14 inches] during the first day. It was so unexpected and we thought, wow, this can’t be happening,” said Lee Yong-suk, general director of Yescom Entertainment, which is in charge of promoting this year’s Incheon Pentaport Rock Festival and one of the founding members of Pentaport’s matrix, Triport.

Only five of the 23 scheduled groups were able to play, including resolute British rock band Deep Purple. A good part of the first day and the whole second day were cancelled. Festival organizers saw around 1.4 billion won ($1.2 million) in losses.

It took seven years for the organizers of Triport to recover from their washed-out festival. In 2006, the attempt was revised under a new name, the Incheon Pentaport Rock Festival. With the backing of Incheon city, the three-day event featured around 70 acts, both Korean and foreign, including The Strokes, The Black Eyed Peas and Franz Ferdinand.

Fast forward to 2012 and the Korean rock scene is in full bloom. Like the country itself, Korean rock ’n’ roll dusted off its humble beginnings to evolve at warp speed, with old and new events providing a wide array of choices for music lovers.

Along with Pentaport in August, the Jisan Valley Rock Festival, the largest music festival in Korea, is set to make history this month with British rock group Radiohead headlining alongside The Stone Roses. This will be the first time Radiohead performs in Korea.

Also in August, the Busan International Rock Festival is scheduled to take place in Korea’s second biggest city with acts including James Walsh of U.K. rock band Starsailor as well as Korean indie heavyweights Lee Han-chul and No Brain.

And in June, the Rainbow Island Music & Camping Festival held on scenic Nami Island in Gangwon saw over 20,000 festivalgoers as U.S. singer-songwriter Jason Mraz headlined with a two-hour performance.

Triport’s rebirth as Pentaport, while gaining credibility among rock fans, faced an internal struggle that led to a dramatic split in 2009.

By 2008, Pentaport had become the biggest international rock festival in Korea, bringing in big-name foreign bands like The Chemical Brothers, Placebo and Underworld. Its ties to the Fuji Rock Festival in Japan helped with the organization, and over 50,000 people attended in 2008. But the organizers still couldn’t break even.

The promoters of Pentaport, Yellow 9 and Yescom, then got tangled in a messy feud that saw members of Yellow 9 walk away to form their own festival, Jisan Valley Rock Festival, which debuted in the summer of 2009.

That year, the two festivals were held on the same weekend. Jisan stole the show by booking Oasis, Weezer and Basement Jaxx, among others, drawing in over 52,000 fans.

With popularity growing, Jisan Valley decided to reach out to chaebeol CJ E&M in 2011. The entertainment division of CJ is now the festival’s main promoter.

“Some hardcore rock fans have criticized Jisan for selling out to a big conglomerate,” said Lee Jae-hyang, a manager at the music division of CJ E&M who is in charge of marketing for Jisan Valley this year.

“But rock festivals are actually a big added-value business that can bring new jobs to the region and promote a country’s brand value. To run a big scale operation like this for the long-term, you can’t survive with just rock ’n’ roll spirit.”

Jisan Valley continued to make headlines this year, mainly for securing a performance by Radiohead. Other big names including Elvis Costello and the Imposters as well as James Blake are set to perform from July 27 to 29.

Meanwhile, since their split with Yellow 9 in 2009, Pentaport has been carving out its own niche, featuring more hardcore, heavy rock bands. Accordingly, this year the festival will feature performances by British alternative rock bands Snow Patrol and Manic Street Preachers, as well as hardcore Korean thrashers Crash and Kingston Rudieska. With partial support from the Incheon government, Pentaport organizers said the festival takes pride in its semi “public” nature.

The general director of Pentaport also added that because of this connection to the Incheon city government, the ticket prices at Pentaport are relatively cheaper than other rock festivals and that the price of food and alcohol are lower as well. A three-day pass to Jisan this year goes for 250,000 won while Pentaport charges 165,000 won.

“Our charge for a pint of beer, at 3,000 won, has stayed the same throughout the years. I think because we have a duty as a semi ‘public’ event, we can’t raise prices as easily as the others,” Lee said.

Super!Sonic: The new kid on the block

This year, a strong, new player, Super!Sonic Festival, comes into the picture. It’s the Korean version of Japan’s Summer Sonic Festival. The two will share headlining artists and a unique ticketing format that hasn’t been introduced in Korea yet. Instead of paying for day tickets or three-day passes like in Pentaport and Jisan, visitors to Super!Sonic will be able to choose the stages they want to see and only pay for those tickets, ranging from 77,000 won to 110,000 won. Another advantage of Super!Sonic is its convenient location at Seoul’s Olympic Park. In addition to headliners The Smashing Pumpkins and New Order, the festival will also feature Tears for Fears and The Vaccines, as well as big name Korean acts including indie rock band Jaurim.

According to Choi Seung-wook, head of the Super!Sonic Festival, the direct connection to Summer Sonic in Japan is a win-win situation for both festivals.

“Jaurim will be one of the headliners at Summer Sonic this year - not just another band performing, but a headliner,” he said.

“The connection to Summer Sonic makes it easier for us to get big bands like The Smashing Pumpkins, while it also provides a chance for Korean indie artists like Jaurim to perform in Japan and promote themselves in a big way.”

Even with the substantial growth of the Korean rock festival scene in scale, it still faces many critics who say the events do little in terms of promoting local rock and indie music.

“Of course the pie will get bigger for Korea as these new festivals open, but in terms of bolstering the music industry here, especially the indie rock scene, they are not really influential,” said Jung Woo-yeong, music writer for GQ Korea.

Jung said Korean rock festivals are too hung up on getting big foreign names to headline instead of focusing on the overall balance of the artists featuring in the events.

“Jisan this year is all about Radiohead and all the other bands performing are not getting the recognition they deserve, especially local bands. It’s still all about who got who to perform and not about creating a unique identity as a festival.”

Local musicians are also saying that the events are somewhat prejudiced against Korean acts.

“The festivals are a great chance for Korea to showcase what we’ve got in terms of diverse musical talent, but whenever my band performs at Korean rock festivals, we are treated very differently compared to big-name, foreign bands,” said Cha Seung-woo, lead vocalist and guitarist for local rock band The Moonshiners.

“Korean bands only get one sound engineer, whereas foreign bands are treated to their own team of professionals, not to mention the insignificant performance guarantees we get compared to them.”

Some fans of the events say that the festivals need to pay attention to strong up-and-comers as well, instead of focusing solely on getting popular overseas acts and expecting short-term ticket sales.

Ko Seung-beum, a rock festival fan who has attended Pentaport and Jisan in previous years, said that Korean rock events are not being creative in choosing their line-ups.

“I feel like festivals like Jisan are so set on aging British rock bands that are maybe not as relevant anymore in the indie rock scene globally. The line-up this year is a bit disappointing because it’s not really as forward-minded as other such festivals in Europe or North America,” Ko said.