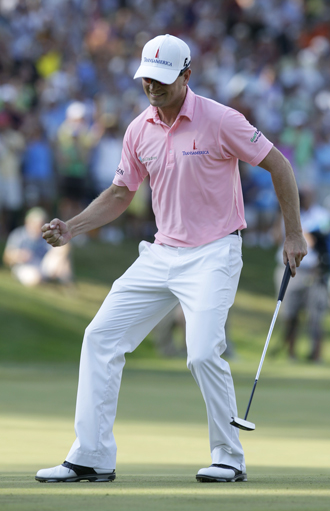 SILVIS, Illinois - Zach Johnson already was a member of the board of directors of the John Deere Classic.

Now, he has another title at the tournament: champion.

Johnson won the Deere on Sunday with a birdie on the second hole of a sudden-death playoff. His 193-yard 6-iron approach from the bunker left of the 18th fairway ran up to less than a foot from the cup for an easy birdie, enabling him to knock off Troy Matteson, whose approach landed 43 feet from the pin.

“I saw it bounce on the green and hoped it would kick left,” Johnson said. “I couldn’t see the golf ball.”

Johnson couldn’t miss hearing the gallery - many of them friends - as the ball crept within a foot of the hole.

“I liked that crescendo from the crowd,” said Johnson, who is from Cedar Rapids, Iowa, about an hour from the Quad Cities.

The kick-in birdie had seemed unlikely minutes earlier after Johnson followed Matteson into the water from the same bunker on the first playoff hole. Each settled for double-bogey 6, then went back to the 18th tee for another try.

Johnson’s bunkered his tee shot again, but this time, he played one of the better shots of a career that includes a 2007 Masters victory and eight other PGA Tour titles.

“It’s one of the best results,” Johnson said.

When Matteson was unable to sink his long birdie putt, Johnson tapped in to secure his second victory of the year, adding to the title he won at Colonial Country Club.

While Johnson tried to downplay what winning would mean to him during the tournament’s first three days, with the trophy in his grasp he admitted that it meant a great deal.

“It just feels awesome,” Johnson said. “This tournament has meant so much to me and my family, from when they gave me exemptions to being a part of its board.

“I don’t really like making things a bigger deal than what they should be. It means a great deal now that I’ve done it.”

Matteson had his best finish since winning the Frys.com Open in 2009, and needed a top-five placing to qualify for the British Open.

So rather than drive to nearby Rockford for a Monday pro-am and then fly to Mississippi for the PGA Tour tournament, he hopped on the charter that Deere has to ferry players across the Atlantic to the British Open. It will be his first appearance in the year’s third major.

“It’s a heck of a way to play a qualifier, for four days,” Matteson said. “When I started this week I really didn’t think about the British Open. It’s fun to play [Rockford] and then go to Mississippi.”

Matteson, playing with three-time defending champion Steve Stricker, led from the first round until a double-bogey on the 15th hole dropped him to 18-under. But he made up for his miscue with an eagle on the par-5 17th, sinking a 60-footer that drew a roar Johnson heard on the 18th green.

“I didn’t know who the roar was for,” Johnson said. AP