A silver lining for domestic airlines

A silver lining for domestic airlines 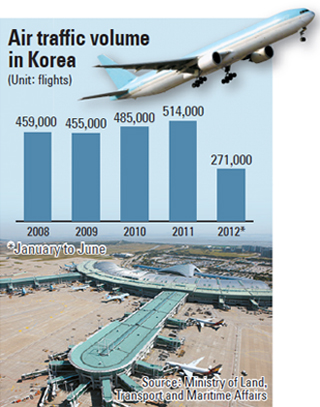 Despite the sluggish local economy, the airline industry seems to be flying high. Air traffic volume soared to a new record in the first half largely as a result of expanded routes in Southeast Asia by low-cost air carriers.

More than 271,247 flights flew from or into Korea during the six-month period, up 8.6 percent from the corresponding period last year, according to the Ministry of Land, Transport and Maritime Affairs on Sunday.

“The hike in traffic was influenced by the recent implementation in Korea of a five-day school week, as families began heading out for more short-distance trips overseas and to Jeju on weekends,” the ministry said in a report.

This, coupled with other trends such as China’s outbound travel boom and a pickup in demand from Japanese tourists after last year’s tsunami, led to a rise in the number of flights between Korea and China, Japan and Southeast Asia. The rising popularity of K-pop also played a role, the ministry added.

From January to June last year, 186 flights were scheduled to run on average each day between Korea and Southeast Asian countries. That number jumped to 211 in the first half of 2012, up 13.4 percent.

Daily flights between China and Korea saw a similar hike, jumping 8.1 percent to 120 this year.

Local tour companies said tour packages to Southeast Asia and China have emerged as the most popular among all global destinations.

According to Hana Tour, the nation’s largest travel agency, more than 68 percent of the 763,000 customers who used its service in the first half traveled to either Southeast Asia or China.

In terms of airline traffic at airports, Yeosu Airport on the country’s southern coast saw strong growth thanks to the Yeosu Expo, a three-month event that wraps up on Aug. 12. The airport in South Jeolla saw its number of flights jump dramatically in the last two months. It increased 40.5 percent in May on-year and 50.1 percent in June.

With the summer vacation season about to start and a reduction in fuel surcharges, the ministry said that it is expecting more flights in the coming months.

According to industry sources, domestic airlines are set to lower their fuel surcharges on international and domestic flights by nearly 9 percent next month.

Air carriers are already coming up with aggressive marketing ploys. Asiana Airlines said that people who book their tickets on its Web site from this Friday to next Thursday will be entitled to a discount on domestic flights. Korean Air is also offering discounts for domestic destinations until Sept. 26.

Meanwhile, low-cost airline Jeju Air launched a “one-plus-one” promotion for customers who buy round-trip tickets to Japan. Until July 31, passengers flying the Incheon-Fukuoka , Jeju-Osaka or Gimpo-Nagoya routes will receive a complimentary ticket so a companion can join them on the same flight free of charge.