Art of war and romance for staff

Art of war and romance for staff 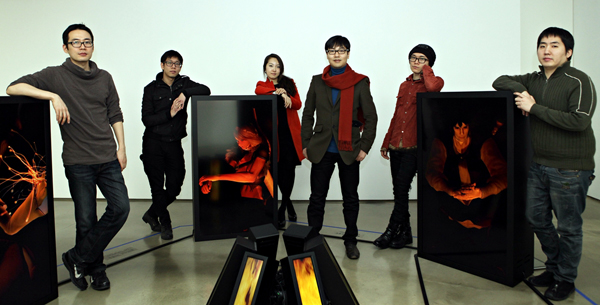 Employees at Nexon’s NX Art Lab project showcase their works at the company’s gallery in Seoul in February. The project is created to nurture creativity of the game developer’s employees as well as give them an opportunity to sharpen their artistic skills.


Many Korean companies have cut back on their expenses to ride out the global economic slowdown, but there’s one element they rarely sacrifice, and in numerous cases have stepped up: Events to cheer up their staff.

Such fun corporate events are being taken increasingly seriously in these trying economic times to keep employees motivated and in the right frame of mind to generate lucrative business development activities.

One employee surnamed Park, 31, at Daewoo Engineering & Construction is a perfect illustration of how such programs can pay dividends for management.

Park said he feels more loyal to the company after it set him up on a blind date last year to the woman he is now in a serious relationship with. He said the ritual end-of-year bonus Daewoo dishes out acts a nice sweetener to the job, but that it pales in comparison to the romantic assistance the company provided given that his workload affords little time to socialize.

Under Daewoo’s so-called “Love Project,” the company organizes single and group blind dates for its staff in association with local matchmaking agencies.

“Working at a construction firm, you really can’t afford time to date someone because you need to travel a lot overseas for construction projects, not to mention make frequent short business trips in Korea,” Park said. “This is the biggest gift I got from my company.”

Nexon, a Korean game developer known for its online games KartRider and MapleStory, has been centering on fostering creativity among its employees by granting those who have worked three years or more special paid vacation. The company also runs a “Global Experience Program” that allows employees to travel overseas for inspiration. In March, Nexon rolled out its “Art Forum N,” a series of art and cultural programs that invite professional artists and professors at Korean National University of Arts to show tutor employees in how to make documentaries, animations, illustrations and paintings.

In the same month, employees got show off their artistic talents by showcasing their animations and paintings works at the company’s gallery.

“Reinvigorating our staff and helping them improve is seen as a key growth engine at our company, and one that will ultimately generate long-term and healthy growth,” said Kang In-su, a Nexon executive. “We will continue forging ahead with our new-concept employee welfare programs that reflect our identity, challenging spirit and creativity,”

In June, CJ Group adopted a new system of fast-track promotions to motivate junior staff by giving those with the interest and aptitude the ability to move into executive positions within a decade of joining the company. Previously, it would have taken them twice as long as they had to spend about four years in each of five stepping-stone positions.

This month the group adopted a policy that has never been tried by other conglomerates as it began banning its staff from smoking within a 1-kilometer (0.6-mile) radius of buildings of the group’s headquarters and food business units, including CJ CheilJedang, CJ Foodville and CJ Fresh Way. It is encouraging employees to moderate their drinking and take up more healthy pursuits.

These moves were adopted after CJ Group Chairman Lee Jay-hyun began pushing his belief in the need to nurture a more innovative corporate culture. At one recent meeting, he reportedly stressed the importance of this to top executives, saying that as CJ’s core business is culture and entertainment, employees should practice what they preach.

Others have opted for more Special Forces-style training to install a sense of fearlessness among their staff. 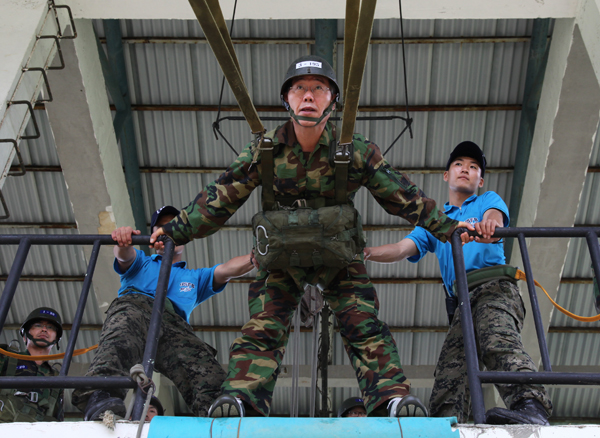 Park Cheol-gon, the CEO of Korea Electrical Safety Corp., gets ready to make an 11-meter (36-foot) descent at a training session at Special Warfare Command Black Panther in North Chungcheong in July. Provided by each company


Park Cheol-gon, the CEO of Korea Electrical Safety Corp., recently took 200 of his executives and employees to a training ground in North Chungcheong used by the Korean military’s Special Warfare Command. Like the elite parachute regiment known as the Black Panthers who train there, the office men and women were put through their paces by being made to repel down 11-meter (36-foot) descents.

“Park chose Special Warfare Command because he wanted to cheer up employees, who tend to get demoralized by all the electricity-related mishaps that happen frequently in summer, coupled with the ongoing economic slump,” said an official at the corporation.

Meanwhile, Samsung Group revived its company sports day after a 17-year break to foster more of a team spirit among young employees in their 20s and 30s.

The group came under the media spotlight last month after its corporate strategy office said it will pick 10 members of its workforce to have lunch with Samsung Electronics Chairman Lee Kun-hee. This is meant to symbolize the importance of communication in celebration of Lee’s 25th year in the post.

Over 2,000 employees applied for the opportunity to dine with Korea’s richest man.