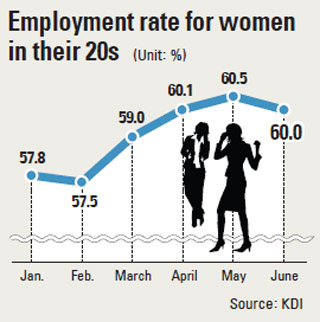 Women in their 20s engaged more heavily in economic activities in the second quarter, at a time when the government has ramped up free child care support, a new report shows.

The number of women aged 20 to 30 who were “economically inactive” due to the demands of child raising fell by 44,000 to 237,000 from April and June, the Korea Development Institute (KDI) said yesterday.

Before this, the number hovered around 280,000 for several years.

A comparison of second-quarter results show that women have been dropping out of the national workforce at a slower rate recently. For this three-month period, the number of employed women under the age of 30 dropped 8,000 from 2011 to 2012, but by a much larger 46,000 the year before.

Given that low fertility rates have caused the population of women in their 20s to dwindle, employment figures in this age group were expected to decline.

The employment rate for this demographic also rose by 1 percentage point to 60.2 percent. It is the first time the figure has reached 60 percent since 2005.

When the numbers are compared to how their male counterparts fared, however, the growth trend becomes more apparent.

The employment rate for men in their 20s stood at 57.6 percent for the quarter, a 0.9-percentage-point slide from the same period in 2011.

Some demographic and economic experts said the increase in employment of women younger than 30 could be attributable to the implementation of the government’s more inclusive free child care support program in March.

From March, the government began enforcing a controversial welfare policy measure by offering subsidies to all households who either have infants under the age of two or children aged five, regardless of their income.

Hwang Soo-kyung, a researcher at KDI, said it would be a misrepresentation to attribute the changing employment pattern entirely to the free child care policy.

“Women’s economic activities are affected by the amount of time and costs spent on taking care of their children,” Hwang said. “But the latest rise in employment of this demographic also partly stems from a rise in the number of short-term jobs entailing less than 15 working hours a week.”