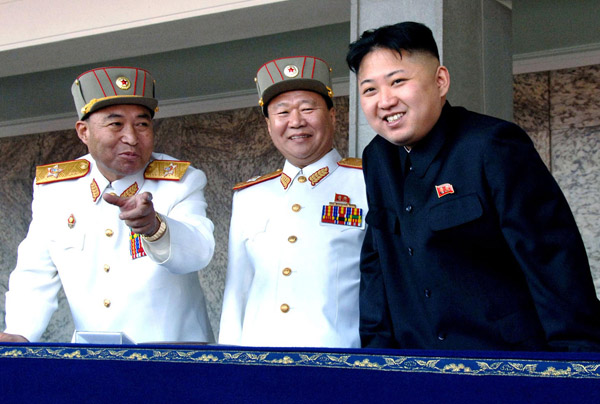 In this April 15, 2012 file photo released by the Korean Central News Agency, North Korean leader Kim Jong-un, right, smiles with Ri Yong-ho, left, who was Vice Marshal and the military’s General Staff Chief at the time, during a massive military parade in Kim Il Sung Square to celebrate the centenary of the birth of his grandfather, national founder Kim Il Sung, in Pyongyang. [AP/YONHAP]

Ri was considered the second-most influential military figure in the North after Kim Jong-un, who is supreme commander of the Korean People’s Army.

According to the KCNA, the central committee of the Workers’ Party decided Sunday to “relieve Ri Yong-ho of all his posts for his illness” at a meeting held by the member of the political bureau, North Korea’s ultimate inner circle.

KCNA did not specifically mention Ri’s position as chief of the general staff of the Korean People’s Army. It named no replacement for him for any of the positions.

While KCNA cited illness as the reason, Jeon Hyun-jun, a senior research fellow at the Korea Institute for National Unification, said, “We cannot rule out the possibility that Ri was dismissed because he lost a power struggle with other military leaders in the North.”

Ri was a member of the central presidium of the Workers’ Party and also vice chairman of the party’s Central Military Commission.

Ri, who was born in Tongchon, Kangwon Province in North Korea, joined the military in 1959 and was appointed lieutenant general of the Army in September 2003. He was promoted to general in 2009.

In September 2010, Ri emerged as a prominent military figure when the North convened its first Workers' Party caucus in 44 years.

At the meeting, Ri was appointed vice marshal of the Army and vice chairman of the Central Military Commission, holding the same rank as Kim Jong-un.

It was at the meeting that Kim Jong-un made his first public appearance. Analysts speculated that Ri’s speedy promotion was related to the plan for Kim Jong-un to succeed his father Kim Jong-il given the fact that Ri was often standing between the father and son at major events.

After former leader Kim Jong-il died last December, Ri is known to have played a role in helping Jong-un maintain control of the military. Ri accompanied Jong-un on his first several trips to military units.

Ri was also one of the eight top officials who escorted the funeral coach of Kim Jong-il last year, along with Jong-un and his uncle and protector Jang Song-thaek.

Although KCNA cited illness for Ri’s fall, speculation is rising that the North is in a major power struggle.

The South Korean government also remarked on the “unusual” nature in the surprise announcement.

“It’s considered unusual to hold a political bureau meeting on a Sunday, and unprecedented to discuss a personnel-related matter and also to dismiss such an influential figure,” said an official from South’s Unification Ministry.

“It looks like there may be some irrational goings-on within Pyongyang’s internal power structure.”

According to South Korean officials, records show that the North usually gives a grace period before dismissing an ailing official.

In the case of Jo Myong-rok, a top military official and a political heavyweight loyal to Kim Jong-il who died of heart disease in 2010 at the age of 82, despite his age and health problems, he retained his post.

“We have to see the move as an internal power feud,” said a senior government official, saying that Ri showed no sign of illness when he made a speech in late April at a meeting of top officials marking the 80th anniversary of the Army’s founding.