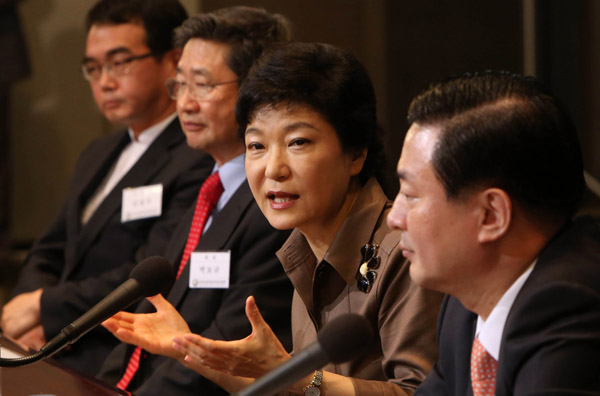 Park Geun-hye, second from right, former chairwoman of the ruling Saenuri Party, participates in a discussion hosted by the Korea News Editors’ Association in Seoul yesterday. By Ahn Seong-sik


Park Geun-hye, presidential front-runner of the conservatives and the eldest daughter of the late president and strongman Park Chung Hee, defended her father’s military coup in 1961 yesterday, calling it “unavoidable, yet his best possible choice.”

Park, former chairwoman of the ruling Saenuri Party, addressed a wide range of issues about her party and her presidential ambition at a discussion hosted by the Korea News Editors’ Association yesterday. The most sensitive topic was Park’s father, whose rule from 1961 to 1979 continues to divide Korean society.

While conservatives defend Park Chung Hee’s authoritarian rule for its contribution to Korea’s industrialization, liberals criticize him as a ruthless dictator who brutally suppressed democracy.

Park’s father’s history and legacy has always been a controversial part of her political career, and is expected to become more so as she runs for president.

Asked yesterday about the May 16, 1961 coup in which her father rose to power, Park defended her father’s action.

“At the time, Korea was the second poorest country in the world and faced a serious security crisis,” Park said. “I think my late father made an unavoidable, yet his best possible choice.”

Referring to the event as “May 16” instead of using the term coup, Park said it served as a cornerstone of today’s Korea, so she thinks her father made the “right decision.”

“But there are people who disagree, so instead of talking about the right and wrong over this issue, it should be left for the people and history to judge,” Park said.

Regarding her father’s constitutional amendment in 1972 to extend his rule, Park also said history should judge his action, but issued another apology to the victims of her father’s dictatorship.

“I always feel sorry for the people and their families who suffered during the period,” she said. “As I have said before, I once again extend a serious apology.”

Park’s latest remarks were similar to her position made public during her first presidential bid in 2007, but slightly different. In 2007, she called the military coup “a revolution to save the country,” prompting a lot of criticism from liberals.

Last week, when formally announcing her presidential run, Park talked about her mother’s assassination in 1974 and her stepping into her role as first lady, but she made no mention of her father or other controversial issues such as the coup.

“It is hard to find introspection and self-examination from Park,” said Representative Jung Sung-ho. “We can already feel the high-handedness of an absolute monarch in her.”

“A politician who calls a military coup that overthrew a democratic government ‘the best possible choice’ doesn’t deserve to become the president of a democratic republic,” Jung continued.

During yesterday’s discussion, Park also refuted criticism that the Saenuri Party has become her own private political army. The party is under severe pressure for using a vote in the National Assembly to prevent one of its representatives from being arrested on bribery charges.

Park has been leading the effort to defuse public anger over the party’s vote to shield its lawmaker.

“We needed to apologize and fix the mistake,” Park said of the party’s dilemma. “If that is called an attempt to privately own the party, that just misses the essence of the problem. I am seeing no personal gain from this, so it is wrong to say that I own the party.”

She also defended her younger brother from an accusation that he is involved in corruption surrounding Samhwa Mutual Savings Bank.

“If there was any suspicion,” she said, “the prosecutors would have summoned him. But there was no request.”

Asked about how she will oversee her family if she is elected president, Park said a systemic effort was needed to prevent influence-peddling scandals involving a president’s family.

“I think a law should be established to allow independent counsel investigations at all times to look into corruption scandals of the families of powerful people,” Park said. “To stop corruption and irregularities in the Blue House and among presidential aides, a special monitoring system should be introduced.”

“The DUP wants to dissolve the conglomerates, but I don’t think that is desirable for our economy,” she said.

Park also belittled liberal rivals Ahn Cheol-soo and Moon Jae-in. Asked to evaluate them, Park said, “Off the top of my head, I don’t have anything to say.” Of Ahn, Park said: “Honestly, I really don’t know what he is thinking. He probably has his own thoughts, but it is difficult for me to comment because they have not really been made public.”

Regarding the DUP front-runner, Moon, Park said opposition candidates are focused on “Park Geun-hye bashing,” so she cannot remember his other positions.