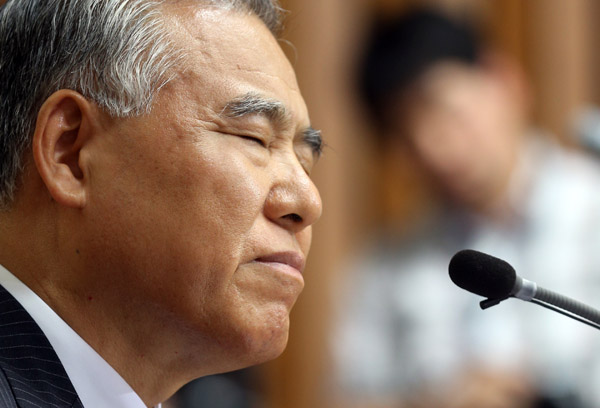 Hyun Byung-chul is grilled at a confirmation hearing for his reappointment as chairman of the National Human Rights Commission yesterday at the National Assembly in Yeouido, western Seoul. By Kim Hyun-soo


Hyun Byung-chul, President Lee Myung-bak’s appointee to head the National Human Rights Commission, had a rough time at a confirmation hearing for a second three-year term at the National Assembly yesterday.

The controversial Hyun, 68, was lambasted by both opposition and ruling party representatives and accused of plagiarism, hanky-panky on the real estate market and allowing his son to dodge military duty by getting fat.

Hyun was criticized for lack of experience in human rights after taking over the position in July 2009 and for blocking any investigation that might embarrass the government. Hyun was formerly dean of Hanyang Cyber University.

The National Human Rights Commission, founded in 2001, is supposed to be independent.

Amnesty International Korea expressed concern about Hyun’s reappointment yesterday saying he “poses a threat to the independence and impartiality of the rights commission.”

Hyun responded that the accusations were not valid as the papers in question were written “before the 2004 guidelines on plagiarism,” and that he had never plagiarized a student’s paper.

Seo Yong-gyo, a Saenuri Party lawmaker, criticized Hyun for receiving 1.25 million won ($1,090) for a two-hour lecture at a private university and spending 120 million won on travel as chairman of the commission.

DUP representatives also suggested that his son avoided hard military duty by gaining 13 kilograms (29 pounds) after his senior year in high school, during which he weighed 100 kilos.

Hyun’s son was assigned work in public service rather than in the military.

Hyun said his son was overweight “from elementary school” and in the process of repeating a year of high school gained more weight.