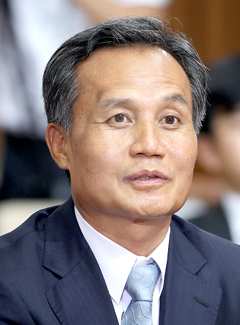 The National Assembly’s vote on motions to confirm the appointments of four Supreme Court justice nominees was delayed yesterday as the ruling and opposition parties failed to narrow down their differences over a controversial candidate.

Throughout last week, the legislature held confirmation hearings for four nominees to fill the vacancies in the country’s highest court. While the ruling Saenuri Party wanted to approve all four candidates, the main opposition Democratic United Party disagreed with one particular candidate, Kim Byung-hwa.

During his confirmation hearing Wednesday, DUP lawmakers accused Kim of accepting bribes to use his influence to scale down a probe into a savings bank. He was also criticized for alleged real estate speculation and a possibly draft-dodging son.

“It is unimaginable for a law-breaker with that many offenses to become a Supreme Court justice,” said Representative Park Young-sun of the DUP, a member of the legislature’s special committee for the confirmation hearings. “Kim must give up his nomination.”

The Saenuri Party, however, said Kim’s problems were not serious enough for him to be kept from the Supreme Court bench, and it rejected the allegation of bribery.

“Kim is not unfit,” said Representative Lee Han-sung. “And in particular he has nothing to do with the savings bank scandal.”

After the two parties disagreed over Kim, the voting scheduled for yesterday was canceled. The parties started negotiating in the afternoon to arrange another voting date.

Since confirmation hearings for Supreme Court justice nominees were introduced in 2000, no candidate has failed the process.

But the Saenuri Party is in a weakened position after its lawmakers shielded one of their own from arrest over bribery charges last Wednesday in the National Assembly, and the possibility was growing that Kim, a 57-year-old director of the Incheon District Prosecutors’ Office, would fail to be approved despite a tradition that a veteran prosecutor be included among the 13 justices of the Supreme Court.

After an independent nomination panel from the Supreme Court makes recommendations, the chief justice makes a final selection of candidates to fill the vacancies at the highest court. After obtaining the National Assembly’s approval, the president appoints Supreme Court justices.

Last month, the nomination panel made 13 recommendations, and Kim and three others were chosen as nominees. It remains unclear if one of the nine remaining candidates would be nominated if Kim fails to be approved or whether a whole new process would begin. “We have to wait and see the final decision of the National Assembly and then begin a legal interpretation on how to handle the matter,” a Supreme Court official said.