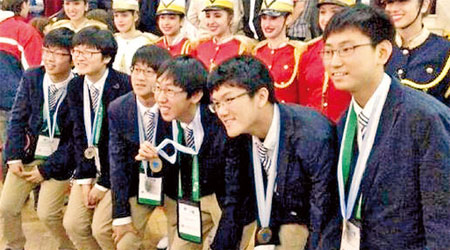 All six high school student members of the team won gold medals to earn a total score of 209 points in the competition, held from July 4 to yesterday.

This year’s international competition involved 548 high school students from 100 countries. It was the first triumph by the South Korean team since it first took part in the competition in 1988.

Russia and Canada came in fourth and fifth, the Ministry of Education, Science and Technology said yesterday, and Japan ranked far behind in 17th place.

North Korea came in 12th with two gold, one silver and three bronze medals. Since joining the competition in 2007, the team from Pyongyang has shown steady progress and came in 5th in 2009. Last year it ranked 7th while the South Korean team lagged behind at 13th.

“I didn’t send him to cram schools but tried to make him take an interest in math in everyday life, like cutting an apple in half,” Ryu Jeong-jae, Kim’s mother, told the JoongAng Ilbo.

The Olympiad, which was first held in Romania in 1959, is held in a different country each year. Next year it will be held in Santa Marta, Colombia.