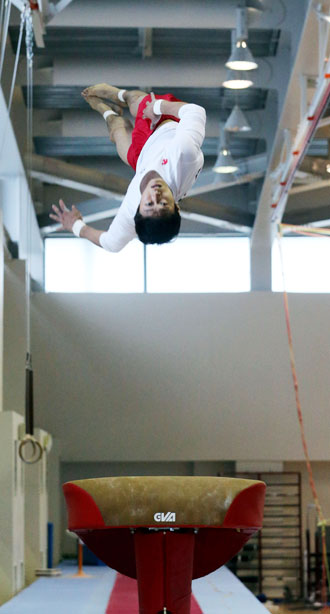 Yang Hak-seon was never afraid of heights or playing on the jungle gym at school. His knack for dangerous flips off the monkey bars made him a natural fit for the youth gymnastics team. But when trainers pushed him too hard, ridiculing his falls and botched landings, Yang walked away from the sport as a young teenager.

The vaulting prodigy would return stronger, both mentally and physically. At 19, he now hopes to win Korea’s first-ever Olympic gold medal in gymnastics.

Yang is the reigning world champion in men’s vaulting after winning gold at the World Gymnastics Championship in Tokyo last October. But the Olympic stage is different. The young gymnast said he already feels the pressure to bring home the gold.

“I feel the burden, but I know it is something that I have to overcome,” Yang said by telephone hours before he and other national gymnasts left for London on Monday.

His technique is so difficult for others to copy that it has been named after him, “Yang Hak-seon,” by the International Gymnastics Federation. The technique, which The Associated Press once called “the hardest vault ever attempted,” is a handspring front triple twist and has a difficulty value of 7.4, currently the highest in the sport.

Yang is mastering an even harder technique, which he and his coaches call “Yang Hak-seon 2,” but he said he wants to play it safe and will use the first technique only in London.

The country has brought home four bronze medals as well, including one by Yang Tae-young, who was robbed of an all-around gold medal after a scoring error from the judges at the 2004 Athens Games. Paul Hamm of the U.S. won the gold instead and Yahoo! Sports picked Yang Tae-young early this week as one of the most unfortunate athletes in Olympic history.

After the fiasco, the national gymnastics team has implemented psychological training to help athletes keep composure during the actual competition.

Yang Hak-seon said that he knows the Olympic stage can be different from practice, with a number of variables able to throw an athlete off. But the 19-year-old said he does not worry too much.

“I tend not to feel excessively nervous during actual competitions and I think I can maintain calm this time,” said Yang. He said he will focus the remainder of his training in England on perfecting his landing posture.

“It is difficult to forget what happened to me and I hope Hak-seon does well as usual and brings home a gold medal.”

A gold medal in London would put Yang Hak-seon in a group with Kim Yu-na and Park Tae-hwan, two star athletes in Korea who won Korea’s first gold medal in their respective sports, figure skating and swimming.

Yang said he likes Kim, 21, and Park, 22, not so much as fellow athletes, but rather as super star idols. Kim and Park are rarely seen in the Taereung National Training Center in northern Seoul due to overseas training and commercial contracts, he said.

If Yang wins gold, he said he would use any fame or money to contribute to the development of the sport.

“Gymnastics remains an unpopular sport, but if a chance to boost public interest in it comes about because of me, many children will dream about becoming gymnasts,” he said.

Yang said he also has a personal motivation to win gold. He started gymnastics in elementary school following his gymnast elder brother. His elder brother quit not long after and is now a career soldier as staff sergeant in the Korean military.

Yang said he owes gratitude to the support from his family, in particular his mother, who he said had a hard time because of his wandering during middle school.

“I want to give her a good present and hopefully the Olympics could be a chance to do it,” he said. “I want to make her feel that her son has grown up well.”