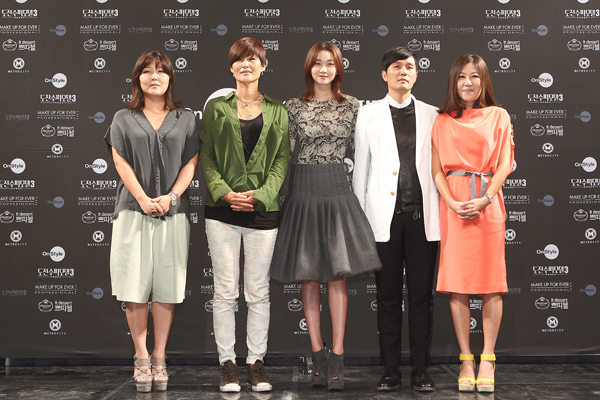 
“Korea’s Next Top Model” is poised at the head of the catwalk for the start of its third season, in which producers aim to expand the reach of the show.

“This season we want to bring in aspiring models from other countries as well. We had a casting call in the countries where the show is aired and opened a YouTube channel to attract applicants from abroad,” producer Yang Song-choel said Monday.

An adaptation of “America’s Next Top Model,” the Korean show will be broadcast in Hong Kong, Taiwan, Singapore, Malaysia, Cambodia, Myanmar, Thailand, Australia and the Philippines.

This season’s winner will receive 100 million won ($87,535), be featured on the cover of W Magazine Korea and, for the first time, be awarded a contract with a leading modeling agency in New York.

Jang, whose role has been compared to that of Tyra Banks on the American show, has recently appeared on other television shows, but seemed happy to be back.

“I feel like I came home when I returned to the model competition show. I feel pleased and comfortable,” said the 32-year-old.

“Korea’s Next Top Model” has always been known for fierce competition, and this season will include a transgender contestant - Choi Han-bit - for the first time. The 25-year-old underwent male-to-female sex reassignment surgery in 2006.

“Choi Han-bit is among the most passionate candidates, despite the prejudices and hardships facing her,” said Yang. “She really wants to be a model. For me, her aspirations are beautiful to see.”

Choi was among 1,200 applicants to the annual SBS-sponsored Super Model Contest in 2009 and gained attention by making it through the contest’s preliminary rounds.

During its first two seasons, “Korea’s Next Top Model” drew 2 to 3 percent of the viewers during its time slot.

*The season premiere of “Korea’s Next Top Model” will air at 11 p.m. Saturday on the On Style channel.