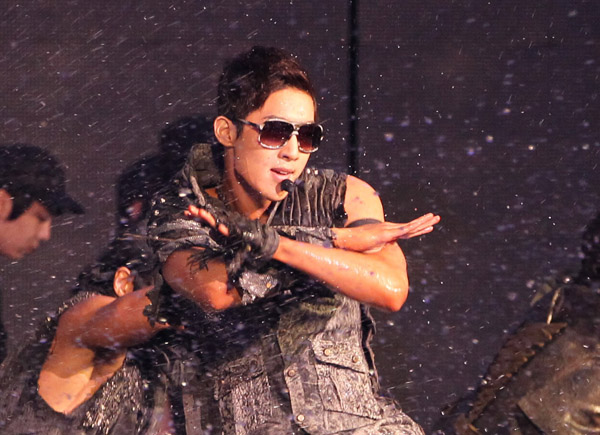 
To celebrate the launch of his second Japanese single “Heat,” Kim Hyun-joong held not one, but two showcases on Sunday at the Saitama Super Arena in Tokyo.

More than 30,000 fans flocked to the event, which was delayed an hour due to Kim having to visit a local hospital; the Hallyu sensation felt pain in his throat during an earlier rehearsal but continued on with the day’s festivities.

With a sore throat unable to keep him down, Kim took to the stage to sing a total of 15 songs per show, including the hit song “Heat.”

He also showed a poetic side to his persona by using the example of stairs as an analogy to fame: “As a person climbs the stairs of life, they must be prepared at all times to come back down. However, I’m still young, so I’ll climb some 20 times more the distance I’ve come,” said Kim.

In the coming month, Kim will divide up his time between filming commitments and live performances.

As well as filming the drama “City Conquest,” Kim will also perform at the Jingu Gaien Fireworks Festival in Tokyo on Aug. 10.