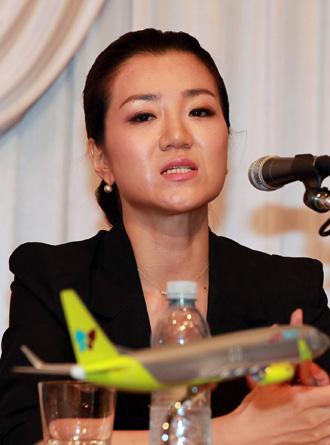 JEJU - Jin Air, a low-cost carrier run by Korean Air, seems destined to record earnings this year, a milestone that will sit nicely on the resume of Emily Cho, the senior vice president of its marketing department and a high-profile chaebol scion.

It has already achieved 90 percent of the operating profit targeted for 2012 and forecasts blue skies ahead, according to its top executives.

“The company will maintain its brisk sales in the second half,” Cho said at a press conference in Jeju yesterday feting its fourth anniversary. “We are going to expand new routes to the Philippines and China.”

“Jin Air has made great improvements over the last four years. I’m excited to be here to make a presentation and deliver our future goals,” she said.

Although Jin Air CEO Kim Jae-kun and other vice presidents also made speeches, the airline said this is the first time Cho has made a formal presentation to reporters since taking the job in 2010. This follows a brief stint as a flight attendant on one of the airline’s domestic routes, an exercise that appears as much a publicity blitz as an opportunity for her to roll her sleeves up and get her hands dirty to familiarize herself with the business. This saw her don the customary jeans and T-shirt and serve drinks to passengers.

Industry pundits said yesterday’s event signals her intention to step up her role within the transport conglomerate. The heiress has until now been steadily expanding her field of operations within both sister airlines.

The three siblings have been ramping up their stakes in Korean Air lately, according to a public notification by the Financial Supervisory Service last week. Heather Cho and Cho Won-tae now own a combined 0.12 percent stake, while Emily has 0.11 percent. The largest shareholder is Hanjin Group with 9.9 percent, followed by Cho Yang-ho with 9.63 percent.

Emily Cho, whose Korean name is Cho Hyun-min, seems to be following in her father’s entrepreneurial footsteps. She said the smaller carrier as a more dynamic testing ground for her talents given its size and scale.

“Korean Air is such a big company that even if I make small mistakes, it does not affect the group that much,” said Cho, who recently finished an MBA course at Seoul National University. “But here [Jin Air], it lets me know the extent of my abilities and lets me utilize the things I learned from my MBA course.”

Cho, who was promoted to her current position earlier this year, also revealed Jin Air’s performance results over the last six months. It posted an operating profit of 7.8 billion won ($6.8 million), up 256 percent from last year, while sales jumped from 72.9 billion won to 119.5 trillion won.

The company also welcomes its 1 millionth passenger last month, marking the fastest growth among domestic low cost carriers (LCC). Cho, who graduated from the University of Southern California in Los Angeles, cited Jin Air’s aggressive embrace of routes that its rivals forsake, as well as the way it effectively manages its flight schedule.

It flew 830,000 people to Jeju from January to June, more than any other discount carrier, and currently runs 11 international routes with eight aircrafts. It plans to add one more to its fleet in the next few months, the company said.

It is also adopting a mileage system in the second half called “Butterfly Points” with rewards including free boarding passes for local flights.

However, competition is stepping up as foreign LCCs like Air Asia and Japan’s Peach Aviation are moving aggressive to tap the Korean market.

Jin Air said it welcomes the challenge. “The arrival of foreign LCCs shows how large the market for low-cost carriers has become,” Cho said. “I think we should welcome this trend, and see it as a good opportunity for Jin Air to grow bigger.”