KT to roll out VoLTE service this fall after trial

KT to roll out VoLTE service this fall after trial 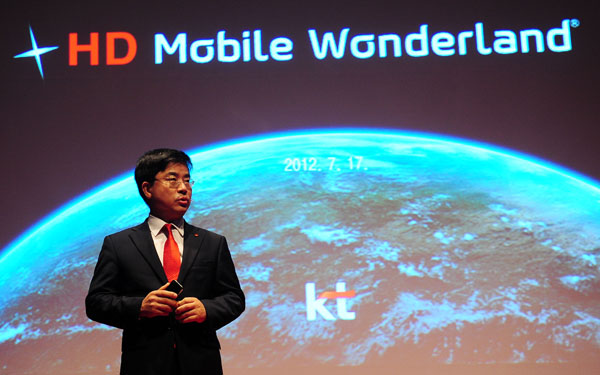 
KT said yesterday it will debut its voice over long-term evolution (VoLTE) service in October.

Starting this weekend, it will pick 300 people from around the country to serve as trial users of the service, which facilitates clearer and seamless voice and video calls over the next-generation mobile network.

Until now, the improved connectivity, which has a frequency bandwidth some 2.2 times wider than regular 3G networks, has only applied to data transmissions.

“VoLTE shortens the phone connection speed and offers better voice quality,” said KT President Pyo Hyun-myung at a press conference yesterday at the company’s headquarters in central Seoul. The company will disclose its monthly charges for the new service later, he added.

KT’s competitors, SK Telecom and LG U+, said earlier they will launch the same service around fall.

Reflecting consumers’ complaints that monthly LTE plans do not offer unlimited access to data, KT is launching two new packages that will make it possible for users to roll over unused data to the following month. This marks a first among the nation’s three carriers.

Pyo said the carrier aims to attract 2.6 million more LTE subscribers over the next five months to meet its target of four million new users this year.

Last week, the Korea Communications Commission decided to give the three carriers full control over how to deal with and charge for the controversial mobile voice over Internet Protocol (mVoIP) service.

Pyo said the company has not yet considered policy changes or adjusting its monthly charges.

The issue of mVoIP has stoked debate recently as KakaoTalk, the nation’s most popular mobile messenger, launched its free voice call service. Carriers claim that Kakao, the messenger operator, is free-loading on their mobile networks.