McCafes set to sprout up across nation

McCafes set to sprout up across nation 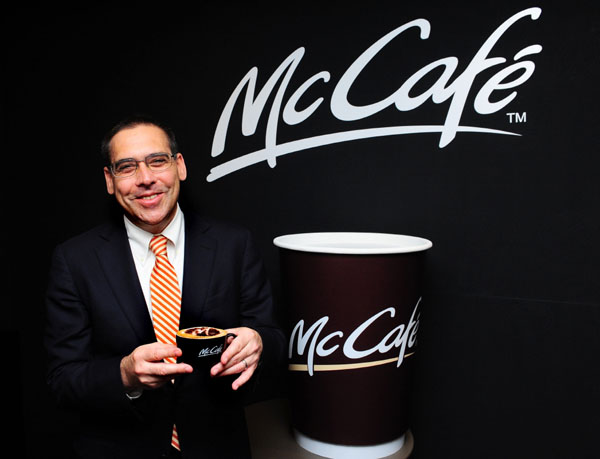 
McCafe will lead McDonald’s growth in Korea as an innovative service platform, according to Sean Newton, the managing director of the U.S. fast food chain’s local unit.

Newton was speaking after a press conference announcing the official launch of in-store McCafes, a year after they appeared at local branches here on a trial basis. 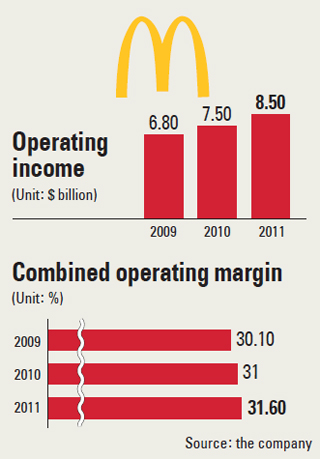 He said McDonald’s Korea is going upmarket by sourcing higher-quality coffee, but that it will keep it prices competitive.

In recent years, the chain has been ramping up its coffee service as the nation’s coffee-consuming population continues to grow.

As Koreans become increasingly health conscious, the nation’s second-largest fast-food chain after Lotteria has had to think outside the Big Mac box to find strategies to attract customers, he said.

After launching its McDelivery service 2006, it started its McMorning service in 2007 offering pancakes and breakfast muffins some 19 years after the chain first set up shop in Korea in 1988.

To differentiate itself from rivals such as Burger King, KFC, Japan’s Mos burger and Korea’s Kraze burger, McDonald’s began test-running its first McCafes in Seoul and Busan a year ago.

“We have confirmed that 95 percent of our customers were willing to revisit McCafe in Seoul and Busan. McCafe also proved its sales contribution in 34 countries that have already started the service,” said a marketing director at McDonald’s Korea.

Among these, the Germany operation saw its sales double after launching McCafe, while sales increased by 228 percent in China, 137 percent in Indonesia, and 106 percent in the Philippines, she said. Nearly 30 percent of McDonald’s total sales in Australia come from McCafe, which was introduced there in 1993, she added.

Despite the economic downturn, Newton said the Korean market is doing well compared to other G-20 countries, citing its potential.

“The outlook of the company with McCafe in the domestic market is also bright in the coming years,” he said. “Compared to neighboring markets such as China and Japan, Korea is relatively small in terms of the number of stores, but has high potential and plenty of opportunities, considering the steady sales growth and new services yet to be introduced.”

The chain operated 270 stores here but aims to raise this to 500 by 2015, creating a total of 12,000 new jobs. One franchise employees 50 staff on average. Within three years, half of the stores will facilitate drive-thru sales, Newton said.

It is also set to increase the share of franchise stores from 10 percent to 50 percent of those in Korea by the same deadline.

“Although 90 percent of McDonald’s stores in Korea are currently operated by the company, Korea is a model in leading franchises in Asia,” he said.

McDonald’s recently launched its “five continents, six menus for Olympics” promotion to coincide with the upcoming London Games, which kick off on July 27. McDonald’s is an official sponsor of the Olympics.

Newton was appointed managing director of McDonald’s Korea in March 2010, a quarter of a century after joining its Australian unit.