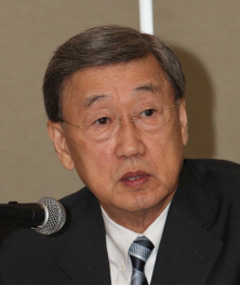 Businesses can bolster the nation’s competitiveness by providing financial support for arts and cultural programs, according to Park Yong-hyun, sitting chief of the Korea Mecenat Association and former chairman of Doosan Group.

Park stressed the need for the corporate sector to sponsor more activities of this ilk to foster creative thinkers. He was speaking at his first press conference since taking the helm late last year.

“Businesses need to view spending on social arts and cultural programs as a kind of long-term investment,” he said.

The former doctor admitted he lacks extensive knowledge about the arts, but said well-funded art programs can have a huge influence on children and young people, who will grow up to contribute to the country’s development. 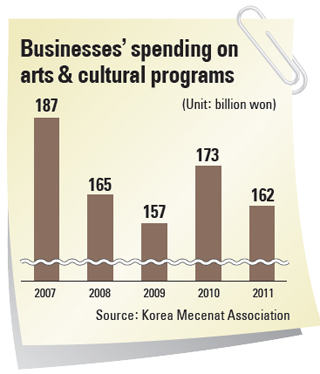 The group’s Yonkang Foundation started to make investments in cultural programs in 2007 as it built Doosan Arts Center in Jongno, central Seoul. According to the chairman, Doosan’s brand image has improved significantly since then. It now buys paintings and exhibits them at the arts center.

“When I was interviewing candidates at Doosan Group, I felt that Doosan’s public image helped attract a great number of outstanding talents,” he said.

The country’s 500 largest companies cut their spending on arts and cultural programs for children from low-income households by 6.2 percent last year. They spent a combined 162 billion won ($141 million) that year, according to figures supplied by the association. This followed a 10 percent cut the year before.

Park said it is natural that businesses tend to cut spending on their corporate social responsibility (CSR) programs during economically tough times. However, in Korea, a mere 0.2 percent of those CSR programs concern arts and culture, much lower than other advanced countries.

Hyundai Heavy Industries ranked first in Korea in terms of how much it spent on cultural programs last year. The shipbuilder regularly organizes high-quality art performances for residents in Ulsan, North Gyeongsang, where it is based.

Concerned about prospects of the economic slowdown continuing next year, Park said the association will focus on expanding its current projects and will encourage its members to splash out more generously on existing projects, rather than pursuing new ones.

The new chairman showed a willingness to try and pass the so-called Mecenat Law at the 19th National Assembly.