Shipbuilders fear being financially run aground

Shipbuilders fear being financially run aground 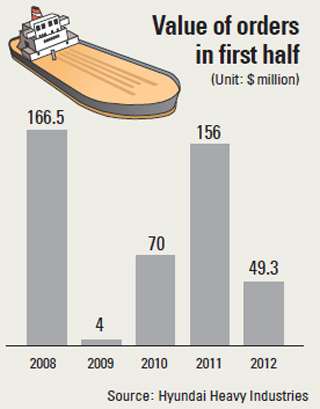 Korean shipbuilders are suffering a liquidity crunch as orders from their major European clients decline and are rushing to sell off assets including majority shares and money-losing business units.

Hyundai Heavy Industries (HHI) announced yesterday that it sold off about 3.2 million shares of Hyundai Motor Group for 746 billion won ($652) to ramp up its financial soundness as the recession in the global shipbuilding market becomes drawn out.

“The company is seeing its operating funds start to decline, because it hasn’t yet received full payments for ship orders placed in 2010,” said a company employee.

HHI was awarded ship orders based on “heavy tail” contracts two years ago, which means that advance payments are so low that, even though the company won $7 billion worth of orders that year, it still hasn’t received full payment, the official explained.

Market watchers say the world’s No.1 shipbuilder is in urgent need of cash as its order values have almost halved in the first half of the year. HHI won a total of $4.9 billion worth of orders in the first six months, compared to $15.6 billion in the same period of 2011.

Delays in the shipbuilder’s plan to list its refiner Hyundai Oilbank on the stock market also fueled speculation about the company’s worsening financial situation.

In total, HHI aims to add 2.2 trillion won to its coffers this year to ease concerns about its liquidity drying up.

As of March, it held 2.34 trillion won in cash, or about 45 percent more than last year, but it still lacks sufficient funds to build expensive drillships. Last year, the company won 11 such orders.

“HHI’s total borrowings are forecast to soar to 6 trillion won. Although this accounts for 40 percent of its total assets, which is not considered a dangerous level, HHI is at risk of suffering a liquidity crunch as shipbuilding orders are shrinking,” said an analyst at Etrade Korea.

HHI is not alone in scouring for money. According to the Financial Supervisory Service, the number of stock sales made by local businesses has already hit 67 this year.

STX Group also plans to sell off its stakes in unlisted subsidiaries with the aim of securing 2.5 trillion won. STX OSV, the group’s subsidiary that builds specialized vessels in Norway, is going to be sold to an Italian shipbuilder for nearly 1 trillion won, according to the financial industry.

It also decided to sell a 49 percent stake in STX Energy to financial investors. STX Energy is one of the group’s more lucrative units, having earned 66.3 billion won in operating profit last year. STX Pan Ocean, the group’s shipping unit, is also planning to sell some of its ships.