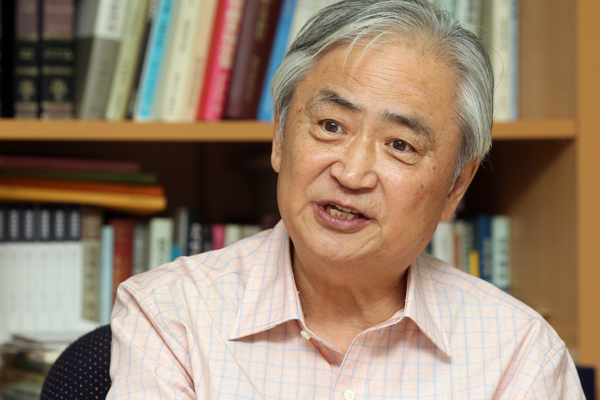 
Oh Sei-chull, professor emeritus at Seoul’s Yonsei University, represents left-leaning scholars in Korea. During a recent two-hour interview with the JoongAng Sunday, the 69-year-old spoke at length about his thoughts on the United Progressive Party (UPP)’s rigged primary election and other sensitive issues, such as December’s presidential election.

What makes Oh’s perspective of particular interest in Korea, one of the greatest capitalist success stories of the 20th century, is how it is fueled by his beliefs in Marxism and socialism.

Oh was born in 1943 to two elite educators - both were professors at prestigious Korean universities - and his life was marked by tragedy before he hit double figures. When the South Korean Army recaptured Seoul in September 1950, his mother was shot to death by a local soldier for being a member of the Workers’ Party of South Korea.

In his book “Talking About Revolution Again,” Oh discusses the impact of such events on his life. He also talks about how he entered Yonsei in 1961 and became a professor of business administration there at 27, making him the youngest professor at the time.

He later received a doctorate degree from Northwestern University in the United States, a period when he became deeply immersed in the teachings of Marx. After returning to Korea, Oh started teaching about socialism, but he faced a turning point when one of his students, Lee Han-yeol, died after police fired tear gas to disperse student demonstrators rallying against the dictatorial government that ruled the country in 1987.

Spurred to action, Oh dived into politics, creating the progressive Minjung Party in 1990. Almost two decades later, he founded the Socialist Workers League of Korea in 2008.

Last December, he was sentenced to two years in prison by the Supreme Court for violating the National Security Law by translating and publishing controversial documents. The sentence was suspended for three years.

The following are some excerpts from the interview.

Q. What do you think about pro-North Korean lawmakers such as Lee Seok-ki and Kim Jae-yeon being proportional representatives of the UPP?

A. Pro-North groups are neither leftist nor progressive. They are nationalists. They are often called leftists in Korea, but they are not. I think the issue will be resolved organically by the public. One elderly man grabbed Lee by the collar during a recent gathering of farmers. Nobody told him to do it. He was just angry at Lee.

Through what prism do you view North Korea?

It is not a leftist state, but rather a kind of mutant, derived from Stalinism. From Adolf Hitler to China to North Korea, they are all the same. They are not socialists but fascists.

What would be the best way for the South to mend ties with the North?

South Korea can support the North financially because we are better off. The Lee Myung-bak administration’s stance toward the Kim Jong-un regime will make the North even more of a mutant. It will also cement its role as an underling to China and China’s brand of capitalism.

What is your take on the third hereditary succession of the North’s governing dynasty?

I’m totally against it. It is eccentric. I feel embarrassed by that and I can’t even bring myself to tell people I’m Korean when I visit other countries.

As the presidential election approaches, economic democratization has become one of the newest catchphrases. Should it be?

There is no such expression. It relates to society’s class structure and income disparities, and the chaebol are at the center of the controversy. To tackle the issue, we first have to decide whether a form of “good” capitalism is even possible.

What do you think about the financial crisis in the euro zone?

I see it as a crisis of capitalism, not finance. Capitalism thrived after World War II, especially for the first 25 years. I think the situation is at a boiling point now. Not only Europe, but the entire world is facing a crisis. I doubt it will be resolved within the next two decades.

What do you tell your students?

I tell them to live by constantly thinking about the future. All the books I use for my lectures are so-called “red books.” They were once on the list of seditious titles. We could only read them secretly on the bus or subway to avoid public censure. But young people today can read them openly. Families and schools should nurture such freedom of thought.

It should have developed more than it has. People fought for it, and to a large degree they achieved it. The kind of freedom of thought and expression that we enjoy wasn’t just handed to us by the authorities. If [late presidents] Kim Dae-jung and Roh Moo-hyun thought their administrations were democratic, they should have scrapped the National Security Law. Or they should have introduced an alternative.

You often say South Korea needs revolutionary Marxism, but isn’t North Korea an example of how awry things can go?

You’re right. What those brainwashed North Koreans need is capitalism. If they can’t do it by themselves, we should help them along. We should help them adopt capitalism by cooperating with the regime [to pave the way for a historic class struggle so true communism can take root].