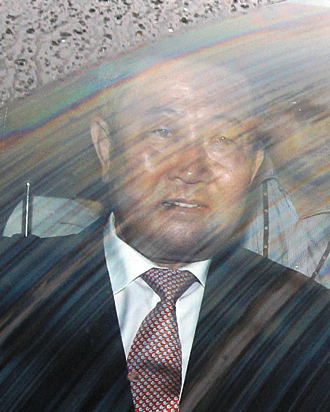 Independent lawmaker Park Joo-sun was transported yesterday from Gwangju High Court to a detention center after a court issued a warrant to arrest him following the National Assembly’s approval of an arrest motion last week. [YONHAP]

GWANGJU - Independent lawmaker Park Joo-sun was detained yesterday after a Gwangju court issued a warrant to arrest him for illegal campaigning.

Following the National Assembly’s approval of an arrest motion last week, the Gwangju High Court accepted the prosecutors’ request to arrest Park, who was sentenced to a two-year jail term by a court in June for illicit campaigning for the April general elections.

Under the current law, the prosecutors need Assembly approval to arrest a lawmaker for further investigation while the National Assembly is in session.

“The witnesses [close to Park] have changed their testimonies throughout the investigations and in the hearings,” said Lee Chang-han, a judge at the Gwangju court, adding there is a reasonable concern the lawmaker might destroy evidence if not detained.

The Gwangju court had reportedly been scheduled to issue the warrant after three or four days of deliberation but granted it after just 35 minutes of review.

The 64-year-old, three-term lawmaker is accused of forming private groups to collect delegates for mobile voting to select candidates for the main opposition Democratic United Party for the April 11 elections.

After failing to receive a party nomination at the DUP’s primary, Park left the center-left party and won a seat in this southwestern city as an independent.

Under the current election law, a confirmed jail term or a fine of more than 1 million won ($860) results in the loss of a lawmaker’s seat.

The prosecutor-turned-legislator has appealed his conviction to a higher court. The conviction, if upheld by the top court, could strip Park of his Assembly seat.