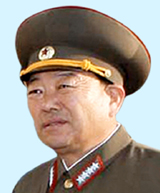 A high-level disagreement over money may have been behind the fall of Ri Yong-ho, the 70-year-old chief of the general staff of the North Korean Army and one of the former protectors of leader Kim Jong-un, according to South Korean government officials.

Specifically, Ri may have tried to protect the military’s control over major income-generating businesses in the North, and that might have put him at odds with young ruler Kim and the Workers’ Party, which wanted control over the businesses, high-ranking government officials in the South told the JoongAng Ilbo yesterday.

Ri suddenly lost all of his posts on Sunday, the North’s official state news agency reported on Monday, supposedly because he was ill.

“The North Korean military has been involved in many profitable businesses and that caused some internal conflicts,” a high-ranking government official in Seoul said.

The North Korean military makes money by exporting missiles and spends the profits on developing its nuclear weapons programs, the official said. Recently, the ruling Workers’ Party tried to use the profits from the missile business to boost the local economy.

“We have been constantly informed of allegations that North Korea’s ruling party is prohibiting the military from earning foreign currency,” an official of the Blue House also told the JoongAng Ilbo.

Analysts currently assume that about 90 percent of North Korea’s exports, which are about $6.3 billion, are from trading with China, and most of the trading is controlled by the military.

“We have detected that the ruling party was trying to restore the cash-cow business occupied by the military,” a high-ranking official of the Ministry of Foreign Affairs and Trade said. “We see that new leader Kim Jong-un is trying to stabilize his power by gaining control over the military’s money-making businesses and boosting the local economy for people.”

Those sources said conservative military officials would have protested the ruling party’s attempt to gain control of the businesses controlled by them, and Ri might have been at the center of the protest.

“The ruling party reportedly moved a department of the military that was in charge of earning foreign currency into the cabinet,” another government source said. “Kim Jong-un’s visits to military posts dramatically dropped as he stepped up his efforts to control the Army.

“In this sense, the dismissal of Ri is a political execution in order to consolidate the ruling of Kim Jong-un,” the source concluded. “Ri reportedly intervened in the ruling party’s business, abusing his powerful position, and that caused internal conflicts with him.”

Kim Jong-un probably started a secret probe of Ri, the source said, “and then found a bribery allegation in order to expel him.”

Two days after Ri lost all his positions, Pyongyang promoted a four-star general to a vice marshal position, raising speculation that the new face will fill Ri’s posts.

The North’s official Korean Central News Agency also reported the promotion of Hyon yesterday in the name of the ruling party’s Central Military Commission and the powerful National Defense Commission.

But state media didn’t mention whether Hyon is the successor to Ri.

“Hyon, 61, had served in the 8th Corp since 2006, covering South Pyongan Province,” a South Korean government source said. “His specific career details and personality are still in shadows.

“Still, when Kim Jong-un made his first public appearance as heir in September 2010, he was promoted to the vice chairman of the Central Military Commission of the ruling party and a four-star general,” the source added. “In this sense, we assume Hyon is a close confidante of Kim Jong-un.”

There are only nine people with the ranking of vice marshal in the regime, including Hyon, sources said. Ri was a vice marshal before he was dismissed.

“Hyon was one of the promising figures behind the throne because he was one of those promoted during the ruling party convention in September 2010,” said Cheong Seong-chang, a senior fellow of the Sejong Institute. “As he was promoted to vice marshal, the possibilities are growing that he would be appointed as new chief of the general staff of the Army, defeating other possibilities on the party’s Central Military Committee.”

Analysts in the South assumed that the 20-something leader Kim is attempting to put the military under the control of the party through the sudden shake-up.

“Since 2009, when Kim Jong-un was nominated to be successor, roughly 20 top military officials have been dismissed or executed,” a South Korean government source said. “We also see that there must have been a power struggle between new faces and old.”

The source said that Ri must have conflicted with Choe Ryong-hae, a 62-year-old rising figure who has been recently appointed chief of the General Political Bureau.

“It’s nonsense that Pyongyang said Ri has some problems with his health,” the source said. “In recent official occasions, Ri hasn’t shown any signs of illness, and he was one of the emerging political heavyweights in the regime.”

The Ministry of Unification also released an analysis of 106 high-ranking officials in the ruling party and the cabinet yesterday. The report said that most of new faces who emerged after the succession of Kim Jong-un are in their 60s, relatively younger than the allies of former leader Kim Jong-il, who are mostly in their 80s or 90s.

Founder Kim executed a group of communist guerillas who openly criticized his dictatorship after the Korean War. In 1968, when North Korean spies failed to infiltrate the Blue House, he also dismissed or executed a group of top military brass who were in charge of operations against the South.