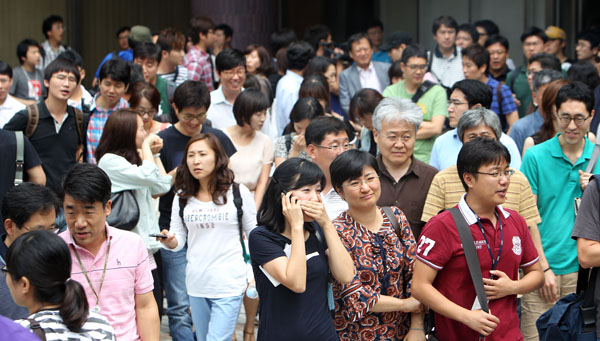 Union members of Munhwa Broadcasting Corporation head out from its main building in Yeouido, Seoul, after holding a meeting yesterday and unanimously agreeing to call off its 170-day long strike against the company. Unionists will go back to work from today. By Kim Do-hoon

Union representatives met yesterday and agreed unanimously to go back to work from 9 a.m., saying that National Assembly lawmakers will help settle their dispute and help force the resignation of network president Kim Jae-chul.

Around 770 employees went on strike January 30 over distorted news coverage commanded by Kim. Workers said he was a puppet of President Lee Myung-bak and demanded news reports be favorable to the Lee administration. The union demanded Kim resign.

“Our decision to return to duty from tomorrow shows our efforts to restore MBC’s tarnished competitiveness and image,” said Jung Young-ha, head of the union. “We [labor union representatives] agreed to put pressure on Kim through other means.”

Union members have been discussing the possibility of halting the longest-strike in the company’s history since last week after ruling and opposition party lawmakers reached an agreement on efforts to settle the dispute at MBC in late June.

Parliamentary representatives have been supportive of MBC’s union and said they will help settle the dispute by placing new directors at the Foundation for Broadcast Culture, an institute founded to promote rationalization of MBC’s management, which would satisfy both management and labor. The new board will be constituted in August. The foundation can hire or fire the MBC president.

“When the new board is in place on Aug. 9, I’m sure that it will open the way for Kim to resign after an objective evaluation on management is conducted,” Jung said. “We’ve done everything that we’re able to do and resisted for 170 days.”

The walkout was a record for MBC. Management and labor were in conflict over many issues. The union raised allegations that Kim used a company credit card for personal purposes while management hit back with lawsuits and disciplinary measures against union leaders.

Though union workers of MBC will return to work today, company insiders note there will be unresolved issues concerning 93 temporary workers, mainly freelance anchors and reporters, who were hired to fill in for workers on strike and also concerning disciplinary actions by management. A total of six unionists were fired and 76 received disciplinary actions.

In response to the union’s decision to call off its strike, the opposition Democratic United Party released a statement yesterday urging Kim to step down before he is dismissed.

“The management of MBC should withdraw disciplinary actions against unionists including those that have been discharged and drop the damage suit against the labor union,” the DUP wrote.