Trade with EU skewing in favor of imports

Trade with EU skewing in favor of imports 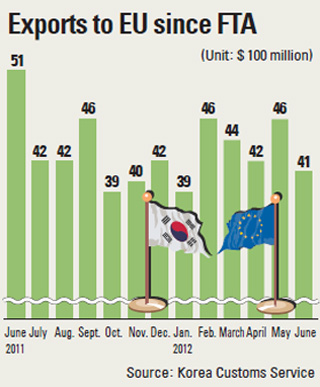 Korea’s trade surplus with the European Union fell dramatically after the free trade agreement with the economic bloc went into effect a year ago due to financial woes in the euro zone. Consequently, exports to the region have been downsized, with imports moving in the other direction.

According to data by the Korea Customs Service yesterday, imports from the EU shot up 13 percent on-year to $49 billion between July 2011 and this June. On the other hand, exports fell to $50.9 billion from $57.9 billion during the period, causing the trade surplus to drop to just $1.9 billion from $14.5 billion reported before the trade pact went into force.
The Korea-EU FTA, which was formally signed in October 2010, took effect in July last year.

Inbound goods were led by automobiles and machinery, which rose 11.3 percent and 22.7 percent, respectively, with numbers for aircraft and related parts skyrocketing 122 percent on-year. There was also a 110 percent spike in petroleum product imports.
“The drop in exports and the trade surplus are directly related to persistent economic concerns surrounding some European countries, which have effectively caused demand for goods to fall across the board,” the bureau said.
With the exception of February, outbound shipments to the EU contracted from the year before, with ships and flat-panel display exports falling 47.3 percent and 15 percent, respectively, compared to the year before, it said.
The data, however, showed that exports of cars and automobile parts soared 38 percent and 15.8 percent from the year before thanks to lower import duties imposed by the EU, with refined petroleum product shipments surging 23.9 percent.

A major cause for the drop is the decreased exports of items that are not covered by the FTA, such as shipbuilding.

“Shipbuilding exports account for about 17 percent of the country’s total exports to the EU,” said Myung Jin-ho, a senior researcher at the Korea International Trade Association. “Shipbuilding order values are so huge that usually payments are made at three different times, so this caused the country’s exports to dwindle.”

“Another reason is that more local businesses are making their products in European countries than ever before, contributing to the fall in total exports,” he added.