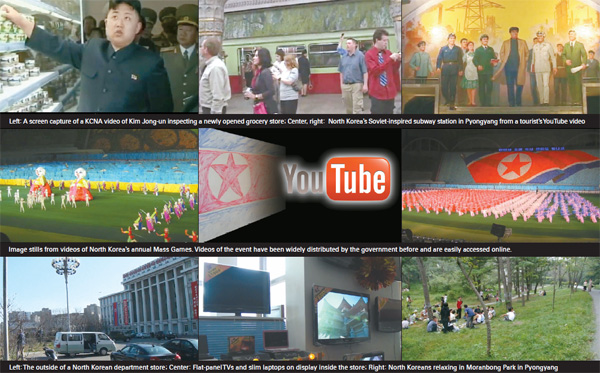 The camera turns to a Coca-Cola ice machine sitting beside a decorated Christmas tree. Heineken beers are stocked in the beverage aisle under Cavic boxed wine.

Pyongyang officials watch tourists intensely from the moment they arrive, with heavy restrictions placed on where they can go and what they can record. Rules seem to be more lax at the country’s few departments stores, where elites and a scattering of tourists are likely to be the only customers.

The visitor, a 32-year-old self-proclaimed Marxist from the Netherlands, according to his YouTube account, uploaded the video online. Half a million hits later, it has become one of the most-viewed online videos of the North not officially released by the KCNA, the regime’s official news agency.

While the images shown are not representative of life for the vast majority of those living in the reclusive state, they do exemplify an important rising trend. As more tourists, most of whom arrive from China, enter the country, the regime’s grip on the flow of information is loosening.

YouTube currently returns about 70,000 results when searching “North Korea,” most of which are news reports released by the KCNA. But a growing number of videos are posted by visitors who are slowly pulling back the curtain.

North Korea’s Air Koryo offered a much improved version of an in-flight meal after a video of a meager-looking meal from the airline went viral in China and South Korea.

Footage of an in-flight meal from Air Koryo, North Korea’s state-owned airline, went viral in the South after its release in June. The economy class meal of the world’s only one-star airline consisted of a meager hamburger and a cup of juice. Inside the bun was a thin patty, two onion slices and mayonnaise, nothing more, nothing less. Netizens complained about the food online.

The latest video clip from the same airline shows a much improved meal with curry rice, sliced ham, fried fish and fruit. The Chinese tourist who posted a review on the portal Sohu said, “I took this picture during a flight bound for Pyongyang. I could taste North Korean apple and cider!”

The change in menu came after the North’s leader Kim Jong-un emphasized improving the quality of in-flight meals in a statement carried by the KCNA on July 5.


Most tourists travel to North Korea for the annual Mass Games in Pyongyang. Videos of the event have been widely distributed by the government and are easily accessed online. But more and more videos shot outside of May Day Stadium are making their way to the Internet.

Footage posted by an American tourist on YouTube shows Pyongyang’s Soviet-inspired metro system, which opened in 1973. At the end of the video, a middle-aged woman approaches the American and says “Hello” in English with a smile on her face.

“That’s only possible in Pyongyang,” said classical pianist Kim Cheol-woong, who defected to the South and is now a music professor at Paekche Institute of the Arts.

“Pyongyang citizens have come across about 100,000 tourists. So they are ordered to memorize manuals titled ‘100 Rules When Encountering Foreigners’ and the state officials check whether they fully know the code of conduct.

“Foreign movies and songs were aired [in Pyongyang] to enhance people’s understanding of culture and even some college students learned how to dance the rumba and cha-cha and were ordered to perform on Kwangbok Street.”

Earlier this month, Disney characters including Mickey Mouse, Minnie Mouse and Winnie the Pooh made a rare appearance at a performance attended by Kim Jong-un. These characters have leaked into the North via China, mostly on items marketed for children.

Another video clip recorded at a fast-food restaurant in North Korea captures a similar story. In the video, a foreign visitor is carefully choosing food, but soon the shop owner’s voice is heard asking, “Why are you taking a picture?” The visitor murmured, “I am recording what I ate.”

The food at Samtaesung Restaurant near Kaesun Youth Park, which opened recently, arrives looking as humble as the first meal from the airline. A hamburger, fried chicken and a plastic glove for eating the chicken. Inside the hamburger is a fried egg, a patty and some sauce.

Very few in the reclusive North are able to afford such luxuries as a fast-food burger, and there is a reason the tourist gained access to the restaurant.

But 10 years ago, before the advent of YouTube, such scenes from Pyongyang, no matter how dubious, were only available through the KCNA.

Chinese travelers have become a vital source of income for many North Koreans with travel routes expanded to bring in much-needed cash.

The scenic Mount Kumgang, where a South Korean was shot and killed, has become a popular destination. The North also opened a cruise line to the mountain on July 13 following China’s construction of a railway to the isolated state for tourism.

An official from Koryo Tour, a Beijing-based tourist company founded by a Briton, said there is increasing interest in traveling to the secretive state following the death of Kim Jong-il.

A string of official state videos also feature North Koreans entertaining in the Moranbong Park and using cutting-edge technology. Some observers say the videos showing a more relaxed side of the state are linked with Kim Jong-un’s attempt to rebrand Pyongyang as a more open and advanced city.

“North Korea is attempting to show that the country is not all about isolation and crack downs. They’d like to proclaim that there is some freedom and enjoyment,” said Kim, the defector-turned-music professor.

Dong Yong-Sueng, a North Korea specialist at the Samsung Economic Research Institute, said these videos aim to depict the young leader as gentle and caring.

“It’s all part of his image-making to imitate a warm, fatherly impression like his grandfather.”

North Korea specialist Chin Hee-gwan of Inje University notes that the new leader seeks to show that he has shifted his focus from advancing military forces to the livelihoods of ordinary people.

“Kim Jong-un inspects military units less frequently than he did earlier this year,” Chin said. “Instead, he recently went to an amusement park and grocery stores to show he is taking care of ordinary North Koreans.”

It is difficult to read the intentions of North Korea’s new leader, who launched a failed rocket in April, ending negotiations with the United States over a food deal to help feed the North’s impoverished. But whether or not the young leader plans to reform the reclusive state, it seems technological shifts and a rise in tourism may have effects outside the regime’s grip.