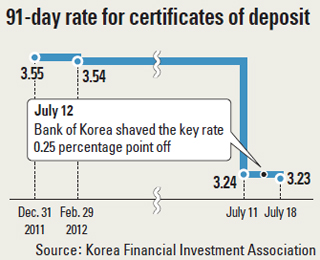 The Fair Trade Commission has extended its investigation into nine major banks that are suspected of colluding to fix the interest rates on certificates of deposit, the agency said yesterday.

The anti-trust agency dispatched its investigators to the respective headquarters of the banks, including Kookmin, Hana, Woori and Shinhan, yesterday.

Investigators were scrutinizing documents and data related to the banks’ CD rates that they confiscated during the raids.

The interest rate on 91-day CDs is used as a benchmark for credit loans, mortgages and bank derivatives.

The Korea Financial Investment Association announces the key CD rate after calculating the average offered by eight local banks, based on an evaluation compiled by 10 securities firms.

Suspicion that banks have been colluding in this area gained ground after the rate stayed at 3.54 percent for the sixth consecutive month last week, despite the Bank of Korea slashing the key interest rate by 0.25 percentage points.

“Borrowers are arguably shouldering the same burden as before, as CD rates didn’t fall despite the BOK’s rate cut,” said an industry source, who declined to be named.

“The interest rates used for nearly 60 percent of corporate lending, and 23.6 percent of household loans, are determined in relation to CD rates.”

CD rates edged down to 3.23 percent yesterday on the news of the FTC’s wider probe.

Libor is used as a benchmark interest rate in the global financial market.

“It’s a matter that requires discussion,” Joo Jae-seong, deputy governor at the FSS, said in a press briefing.

“We will choose whichever among the cost of funds index (Kofix), Korea interbank offered rate (Koribor) and three-month bank debentures serves as the best replacement to improve the current situation.”

He added that it is regrettable the FTC felt compelled to launch a probe into the matter without first discussing it with the financial authorities, which have also been looking into CD rates.

Sources at local securities firms said they may not report their evaluated CD rates to the Korea Financial Investment Association in protest.

This would make it hard for a fair rate to be arrived at based on banks’ average rates.

If the key CD rate is not made public, it could have a negative impact on corporate and household borrowing as the interest rates for these loans are determined in relation to it.

It could also create a massive problem for the interest rate swap market and the floating rate bond market.