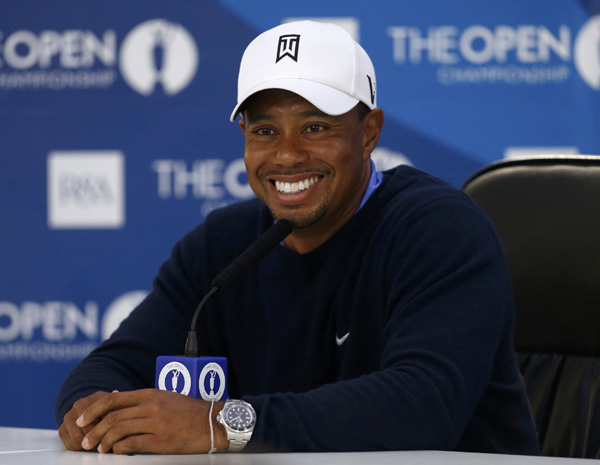 Tiger Woods speaks during a news conference Tuesday after a practice round ahead of the British Open golf championship at Royal Lytham and St. Annes, northern England. [REUTERS/YONHAP]

That was six years ago, and it seems even longer.

It was his first major after the death of his father, and he sobbed on the shoulder of his caddie and his wife, both of whom are no longer with him. There was no discussion about No. 1 in the world because Woods’ point average was nearly double that of Phil Mickelson.

Now it’s a matter of getting back.

The good news for Woods is that the British Open is the first major since the 2011 Masters in which he has a mathematical chance to return to No. 1 in the world. At this time a year ago, he was No. 19 and at home in Florida letting his leg injuries heal.

Only it’s not that simple. Woods has gone four years since winning his last major. Fifteen players have won the last 15 majors, the longest stretch without a multiple winner since 1993 to 1998.

When asked if he was feeling any anxiety over when he will win another major, Woods simply shook his head.

“I just try and put myself there,” Woods said. “I think that if I continue putting myself there enough times, then I’ll win major championships.”

If there are questions about the state of his game, look to the trophies he won at Bay Hill, Muirfield Village and Congressional - more wins than anyone on the PGA Tour, tied with Branden Grace of South Africa for most worldwide.

But the majors have been a disappointment. Woods had his worst finish as a pro at the Masters (tie for 40th), then vanished on the weekend of the U.S. Open when he was tied for the lead after two rounds at The Olympic Club.

He wins one week, he misses the cut the next week.

A miserable English summer of rain has left the course green and soft, and the rough so dense that Woods described some spots as unplayable. That much was evident Tuesday morning on the 10th hole, when he slightly pulled his 3-wood into hillocks covered by thick native grass. Six marshals were looking for his ball. Woods simply walked past them - it was a practice round - and even when he was on the green, the marshals had not abandoned the search.

Throw in some wind and the 206 bunkers that give Lytham its character, and it should be a demanding test.

When he won his first Open in St. Andrews at 19-under 269, Woods famously went an entire week without hitting out of a bunker.

His third claret jug at Royal Liverpool in 2006 was memorable for the fact he only hit a driver once in four days, instead chasing a 3-iron down the brown, brittle fairways.

It looks like he will use a similar strategy at Lytham with its multitude of bunkers.

“This is different,” Woods said. “There has to be some shape to shots. I think that’s one of the reasons why ... the champions here have all been just wonderful ball strikers, because you have to be able to shape the golf ball both ways here.”

That’s what Woods takes pride in about his improved game. Lytham figures to be as good of a measuring stick as any tournament. AP