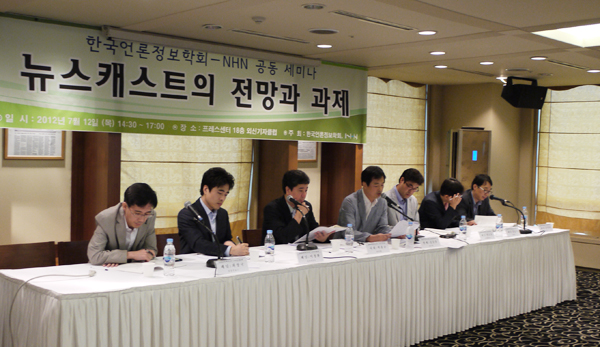 Media experts, newsmen and NHN employees talk at a seminar on Naver News Cast’s outlook at the Press Center in central Seoul last Thursday. Provided by the company


Scorned by the public for vulgar and attention-grabbing headlines on its Naver News Cast service, NHN, which operates the nation’s leading portal site Naver, is gearing up to address the problem for the first time since it launched the service in January 2009.

NHN held a seminar last Thursday titled “Naver News Cast’s Outlook and Tasks” to discuss the status quo of the service and various reform measures with the Korea Association for Communication and Information Studies at the Press Center in central Seoul.

“Ever since we launched the service more than three years ago, there has been a series of public outcries over its problematic nature,” said an NHN spokesman. “We arranged the seminar to have a general talk about it so that the service can evolve in a more constructive direction.”

Naver News Cast refers to the box at the center of the portal site’s front page that runs headlines from 96 news organizations operating in Korea, including newspapers, wire services, broadcast stations and magazines. Among foreign news outlets monitored are the Wall Street Journal Asia and Reuters.

Headlines are submitted by the news organizations and clicking on the link directs visitors to the news providers’ Web sites. But as more traffic means advertising income, this has spurred a trend of eye-catching headlines - often at the expense of taste and moral rectitude. 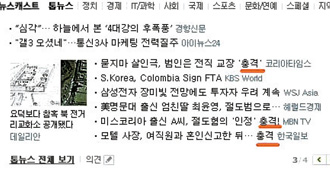 This screen capture shows how three of eight headlines on the Naver News Cast Box contained the word “shock” to lure readers to the news provider’s Web sites when they click on the links.

Popular methods used to hook viewers include using words related to sex, hard core crime or aliens; sensationalizing news by adding words such as “shocking”; and closing sentences with a question mark to arouse curiosity. On some occasions, three of eight headlines on the News Cast contained “shocking.”

Although other portal sites and search engines such as Daum Communications, Nate and Google feed news as well, Naver, which owns 70 percent of the domestic search engine market, is unique in handing over editing power to the news organizations. 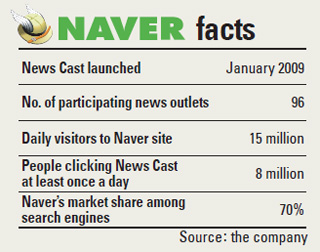 While it serves as one of their profit channels, it has also created a vicious circle of forcing them to provide substandard headlines that can undermine their credibility.

“We keep a stable of 10 reporters and a few interns devoted to producing news articles and headlines solely for the News Cast,” said Seo Jung-ah, head of the creative media unit team at MoneyToday, a media group specializing in economy and finance.

“As the service has a direct link to revenue, news organizations have been refraining from raising questions about it.”

But none seems to want the service removed. In a survey by NHN of 37 news providers, 34 said they oppose canceling the News Cast. The other three asked for “step-by-step improvement.”

“Unless Naver comes up with solutions to the problem,” said Lim Jong-soo, a professor of journalism at Sejong University, “the controversy [surrounding the service] will persist. It is up to Naver what to do with News Cast, but we need a broader policy to resolve the issue of unethical and low-quality news.”

Lee Sung-gyu, head of a startup music-streaming site called Muzalive, mentioned an incident in which Dow Jones Chief Executive Les Hinton in 2009 compared Google to a “ digital vampire” that is “sucking the blood” out of the newspaper business.

In response to the criticism, Google in the same year developed a section called “Google Spotlight,” which highlights “in-depth pieces of lasting value.”

“Just because it has transferred the editing right to news providers, it doesn’t mean Naver can avoid social responsibility. Both Naver and news organizations should set up a model to jointly take responsibility,” said Cho Yeon-ha, a professor of media communication at Ewha Womans University.

At the end of the seminar, NHN’s Yoon, said Naver will cooperate with news outlets and users to come up with an improved version of the platform. He providing no details.