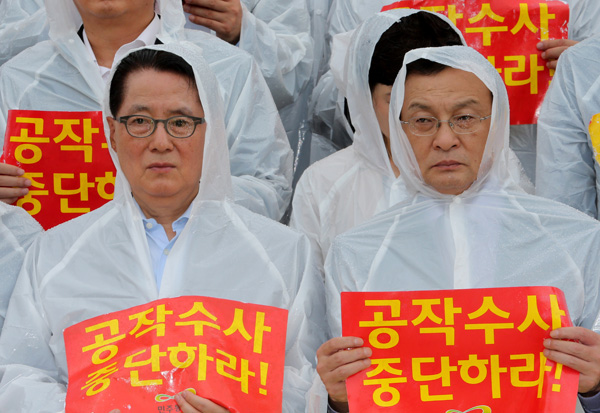 Park Jie-won, left, floor leader of the main opposition Democratic United Party, and Lee Hae-chan, right, chairman of the DUP, denounce prosecutors for what they call a politically-motivated investigation into Park. [YONHAP]


Tensions between the main opposition party and the prosecution escalated further yesterday as the Democratic United Party initiated an all-out campaign to protect its floor leader from a graft investigation.

Calling the probe against Representative Park Jie-won “political oppression against the opposition party,” the DUP held a protest against the prosecution and demanded it bring a warrant if it wanted to question the political heavyweight.

The prosecution on Tuesday asked Park to appear for questioning by 10 a.m. today, accusing him of having received money from two savings banks. Pleading innocence, Park said he wouldn’t submit to the questioning.

The DUP stepped up its efforts yesterday to protect Park. All the lawmakers and officials of the party held a rally outside the National Assembly building to condemn the prosecution.

“The prosecution must stop its political offensive immediately,” Lee Hae-chan, DUP chairman, said at the rally. “Is it appropriate for the prosecution to summon the floor leader of the largest opposition party without any prior consultation? If it fails to reform, the prosecution will face stern punishment from the public.”

Chun Jung-bae, who heads the DUP’s campaign to protect Park, said the probe is intended to tarnish the opposition party before December’s presidential election. He also said the probe was an attempt to divert public criticism from the corruption scandals involving President Lee Myung-bak’s brother and aides. “We won’t cooperate with any political probe,” Chun said.

The DUP’s demand for the prosecution to present a warrant prompted another controversy as the legislature will have to vote on a motion to allow it. The ruling Saenuri Party, which suffered political blowback for having shielded one of its lawmakers from the prosecution’s detention earlier this month, condemned the DUP for trying to hide behind lawmakers’ immunity.

Park Geun-hye, the Saenuri Party’s presidential frontrunner, also pressured the DUP floor leader to “act responsibly before the public because both the ruling and opposition parties have promised to surrender the lawmakers’ privileges.”

Representative Kim Young-woo, spokesman of the Saenuri Party, also accused Park of having tried to defend savings banks while he headed a National Assembly committee last year that investigated the savings banks.

“If he didn’t receive money from savings banks, he shouldn’t avoid questioning,” Kim said. “He just needs to go out and lay bare the truth.”

Prosecution sources told the JoongAng Ilbo they will make additional requests for Park to show up for questioning. If he continues to resist, the prosecution will subpoena him by seeking a court warrant.

Law enforcement authorities are required to obtain the National Assembly’s approval to take into custody a lawmaker during a legislative session.