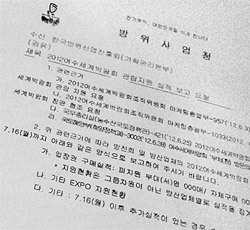 With only 25 days left until the Yeosu Expo finishes its three-month run in the southern port city, the JoongAng Ilbo confirmed yesterday that the state-run Defense Acquisition Program Administration (DAPA) has been bullying local defense-related companies to buy expo tickets in bulk.

On July 6, DAPA, the country’s weapons acquisition agency, sent an official letter to the Korea Defense Industry Association (KDIA), which represents companies that make defense-related equipment and systems, asking how many expo tickets have been purchased by member companies so far.

In the letter, the agency specified that the request was being made with other government ministries and agencies including the Prime Minister’s Office and the Ministry of Land, Transport, and Maritime Affairs. DAPA is under the Ministry of National Defense.

Before sending the official letter to the association last month, the DAPA summoned industry officials to its office for a meeting to brainstorm how they could boost attendance at the expo.

“After we received the letter from the DAPA, we asked defense companies to report to us on how many expo tickets they have purchased so far,” said an official from the KDIA who asked to remain anonymous.

According to the official, the KDIA later told the DAPA that it bought tickets worth 40 million won ($35,000) using its own budget but did not report how many tickets were bought by its member companies.

Complaints have been mounting from the private companies.

“As a private company that needs to win defense orders from the government, we’ve been pushed to help boost expo ticket sales,” said an official working for a defense company. “We really don’t know what to do especially at a time when we are suffering from losses.”

“Before the expo opened, companies were pressured to pay large amounts of sponsorship fees,” said an official from another company, “and they’ve bought tickets in bulk already. It’s not very considerate to pressure companies to buy more tickets.”

The defense procurement agency said yesterday it wanted more military-related businesspeople to visit the event to understand the changes happening in the world.

“The Defense Ministry’s budget is very limited,” said an official from the DAPA. “That’s why we asked companies for their help.”

More than four million visitors have come to Yeosu for the expo as of yesterday morning, which falls short of the eight million expected by the expo’s organizing committee over its three-month stint.

“We plan to offer a 50 percent discount to companies buying tickets in bulk,” said an official from the organizing committee. The expo closes on Aug. 12.