U.K. scholarships given to 25, including defector

U.K. scholarships given to 25, including defector 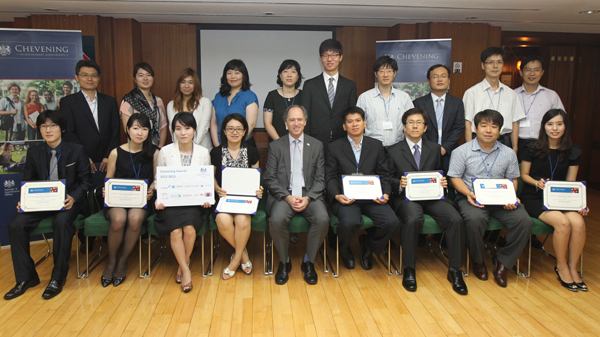 
A prestigious United Kingdom government scholarship was presented to 25 Korean scholars, including one North Korean defector, yesterday at the British Embassy in central Seoul.

Hong Sung-il is the second defector from the North to receive the Chevening Scholarship, which supports a one year master’s program at a university in the United Kingdom.

“Young North Korean defectors can’t avoid English skills when they are living in South Korea,” said Hong, who uses an assumed name to protect his family remaining in North Korea.

Hong, who wants to study social psychology, has taken classes at the “English for the Future” program run by the British Council and worked as an intern at the British Embassy earlier this year to improve his language skills.

The award ceremony was attended by 65 members of the Korean Association of Chevening Alumni, past recipients of the scholarship who have gone onto careers in government, finance, academia and industry. Some 1,100 Koreans have received the scholarship out of a total of over 40,000 recipients worldwide since it was established in 1983.

British Ambassador Scott Wightman said at the award ceremony, “The Chevening scheme identifies the leaders of tomorrow - those who can reach the pinnacle in their respective fields.

“Please do get involved in Korean societies at your universities. If there isn’t one, set one up. And if it’s not active, get it active,” the ambassador told the scholars. “I hope you’ll tell your new British friends about the opportunities available in Korea.”