Legends return to the ball field in rivalry game

Legends return to the ball field in rivalry game 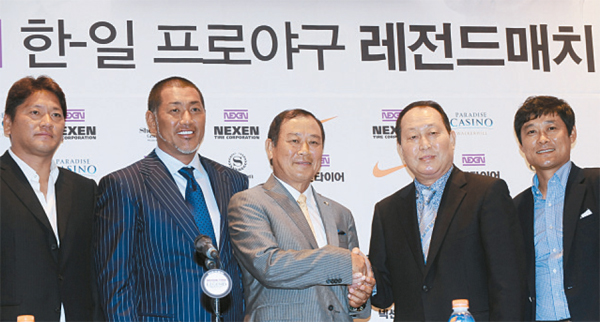 Baseball Hall of Famers in Korea and Japan pose yesterday during a press conference in Seoul held ahead of tonight’s “Legend Match” between the retired baseball stars of the two countries. From left, Kazuhiro Sasaki, Kazuhiro Kiyohara, Taira Fujita, Kim In-sik and Lee Jong-beom. [NEWSIS]


Legendary Japanese baseball players who are visiting Korea for an exhibition game spoke highly of Korean baseball, with a Japanese representative saying the quality of play has nearly caught up with his country.

Nineteen Hall of Famers of Japan’s Nippon Professional Baseball came for a duel with their retired Korean counterparts, dubbed the “Legend Match,” to be held at 7 p.m. tonight at Jamsil Stadium.

It is the first match between two teams representing Korea and Japan since the Korea-Japan Super Match, a quadrennial match that fizzled out after its third game in 1999.

During a press conference in Seoul yesterday, Isao Harimoto, the head of the Japanese team who holds the record for the most hits in NPB, said there is little difference in baseball between the two countries despite Korea’s lack of infrastructure.

“There are more than 4,000 high schools with baseball clubs in Japan, whereas Korea has only around 50 high schools. That is different, but the level of the top-class players in the two countries is almost the same,” he said.

Taira Fujita, the former manager of Japan’s Hanshin Tigers who will take the helm of the Japanese team during tonight’s match, agreed.

Japan, two-time champion of the World Baseball Classic, has long been considered a baseball powerhouse, but Korea is seen by many to have quickly reduced the gap with its neighbor with solid performances during international competitions.

Korea defeated Japan twice in the run-up to the finals of the 2009 WBC, but lost to Japan in the finals. In the inaugurating WBC in 2006, Korea finished third.

“Japan is 50 years ahead [in having a professional baseball league] and Korea being able to have this kind of rivalry match in 31 years is such an honor,” said Kim Sung-keun, the head of the Korean team.

“I think this kind of match will be a big help for the development of baseball in both countries.”

Many beloved baseball stars will return to the field as players for tonight’s match, including Sun Dong-yol, who will be the starter for the Korean team.

Sun, currently manager of the Kia Tigers, led his ball club to six Korea Series during his 11-year run in the Korea Baseball Organization. He recorded 94 saves in the NPB during his four-year stint in Japan.

Kazuhiro Sasaki, Sun’s former rival in NPB who also pitched 228 games in the Major League Baseball, was confirmed as a starter for the team.

“I heard that Sun, my longtime rival, pitched over 130 kilometers per hour (81 miles per hour) yesterday, and I will try to pitch no worse than him tomorrow,” Sasaki said with a smile.

Among the batters on the Korean team are Lee Man-soo, the first KBO player to reach 250 home runs, and Lee Jong-beom, who last month wrapped up his 19-year career, during which he set the record for the most hits and steals.

The match is co-organized by the Ilgu Club, an association of retired Korean baseball players, and the Meikyukai, its Japanese counterpart.