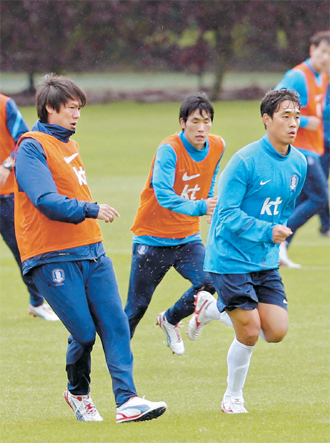 Park Chu-young of Arsenal, right, and other members of Korea’s national Olympic football team train under the leadership of coach Hong Myung-bo, left, at Watford club’s Vicarage Road Stadium near London on Wednesday. The team will take on Senegal in its final tuneup match today (10:30 p.m. KST) before the first Group B competition begins against Mexico on Thursday. Korea is looking for its first Olympic medal in the sport. [YONHAP]