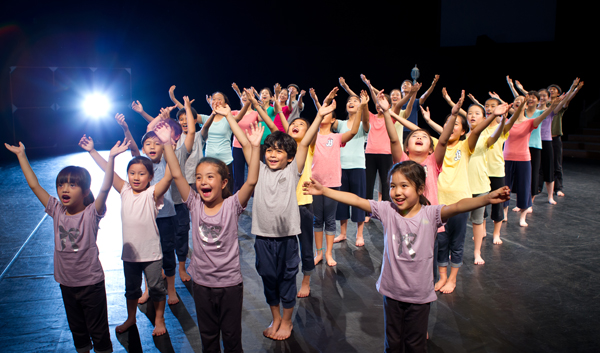 Fifteen children from multicultural families rehearse with members of PG 153 for “Rainbow Dreams,” which will be featured at this year’s Multicultural Festival.


A teenage girl skips ropes alone. With her bronze skin, she stands out from the surrounding children, who approach her slowly. Suddenly, they run away holding their noses and shouting, “Eeew!”

The bronze-skinned girl leaves in tears.

While children of multicultural families are frequently targets of taunts on the schoolyards of Korea, the scene above is a mime, dance and singing performance titled “Rainbow Dreams” that is the highlight of this year’s Multicultural Festival.

For the past two months, 15 children from multicultural families have been gathering to rehearse in a practice hall at the National Theater of Korea. With the beginning of the festival next Wednesday fast approaching, the frequency and intensity of the rehearsals will increase.

For the past three years, the National Theater has organized the annual festival “to introduce the different cultures within Korea and provide a platform where Koreans and expats living in Korea, including multicultural families, can come together to communicate.”

To mark the third year, this year’s festival will include a performance by children from multicultural families. With help from performance group PG 153, “Rainbow Dreams” deals with common issues faced by multicultural children. In the end, the kids overcome their sense of cultural isolation and identity confusion to grow up with the same kinds of hopes and dreams as anyone else. 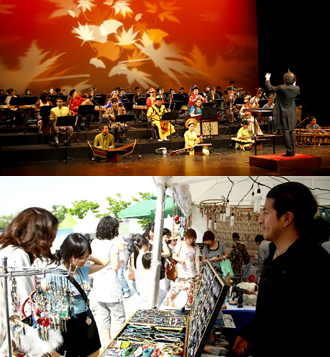 Like these scenes from last year, the 2012 festival will also have traditional performances and an outdoor market. Provided by the National Theater of Korea

“This performance is about dreams coming true, just like my dream coming true when I came in here. This was my dream as I want to be an actress when I grow up,” says Breanna Montoya, 8, whose father is from the United States. “The reason I decided to participate was to experience performing because I’ve never done a public show.”

The 15 multicultural children auditioned to join 15 other young PG 153 performers. The troupe will give four one-hour performances during the festival, using mime, dance and song to tell a story of overcoming the difficulties of living in Korean culture to achieve their dreams.

“It’s difficult to memorize the dance and lyrics of the song, but I’m having so much fun,” says Lee Tae-yang, 8, whose mother is from Mongolia.

Lee’s mother, Sarang Getel, also is happy to see her son enjoying the whole process. “He used to hate going places where a lot of people get together, but now he enjoys coming to practice,” she says.

The organizer explains this is the purpose of “Rainbow Dreams.”

“If these children from multicultural families say they enjoyed the two months of practicing dancing and singing together with Korean performers of PG 153 and become more active in their homes and schools, that is the reason why we’ve created this project,” says a representative of the National Theater.

Twice a day there will be traditional Vietnamese water puppetry shows. Water puppetry was created by farmers to express their wish for the king’s longevity and is performed in a waist-deep pool. Puppeteers go underwater to control the puppets that will tell depict the lives of Vietnamese farmers. The organizers say the performance will allow the audience to experience Vietnamese culture “as if a grandmother is telling the story to her grandchild.”

In addition, the Patchwork Family - a team of artists from Austria, Italy, Russia, Croatia, Hong Kong, Taiwan, Japan and Korea - will perform a reality show, “The Superhero.” The performance challenges the belief that winning, by fair means or foul, is the only way to achieve happiness in life.

Outdoor events, which are free, are also scheduled throughout the festival, including traditional music concerts, circus acts, markets and a photo wall, where visitors can write messages of hope and peace.

*The 2012 Multicultural Festival runs from Wednesday through July 29 at the National Theater of Korea.