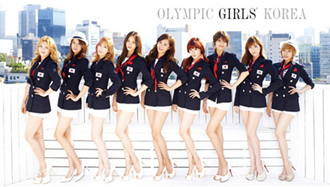 Girls’ Generation took on an Olympic-themed photo shoot for fashion magazine High Cut. In the issue that went on sale yesterday, the nine group members are in various poses wearing outfits resembling the Korean team’s uniform.

The girls said in the accompanying interview they would be cheering on all the Korean athletes during the Games, which begin July 28 in London.

Meanwhile, the photos are spreading like wildfire online and netizens who encountered them were quick to say, “Our team will surely do well with Girls’ Generation cheering them on!”

Last week, the band made headlines when it became one of the most-followed celebrities on KakaoTalk.

From Dec. 28, users of the Korean free messaging software for smartphones were able to friend the group as a “Plus Friend” - a profile maintained by celebrities and brands.

The result was that more than a million users signed up to become the group’s “friends.”