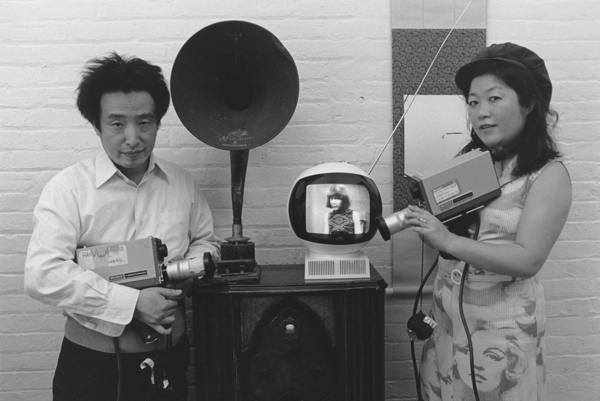 Nam June Paik and his wife, artist Shigeko Kubota, are shown in his New York studio in 1974. Provided by Woongjin ThinkBig, publisher of “My Love, Nam June Paik.”


The late Nam June Paik, often called “the father of video art,” said he wanted to have a large-scale retrospective around the time of his 80th birthday, which is today.

So he would be pleased to know that a retrospective titled “Nostalgia Is an Extended Feedback” is opening today at the Nam June Paik Art Center in Yongin, Gyeonggi.

To mark the occasion, Paik’s widow, Japanese artist Shigeko Kubota, 75, has come to Korea. Her “Duchampiana: Nude Descending a Staircase”(1974), is part of the collection of the Museum of Modern Art in New York.

According to the book “My Love, Nam June Paik” co-written by her and JoongAng Ilbo reporter Nam Jeong-ho, she had a crush that began when she viewed his performance in Japan in 1964 and decided to “become a famous artist to win him.” They met again in New York late that year and soon became lovers. In 1977, they were married.

The Korea JoongAng Daily met her in her room at the Shilla Hotel Seoul on Wednesday. 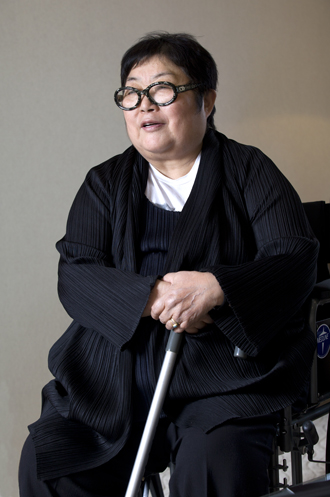 Q. You must feel special about this exhibition that starts on Paik’s 80th birthday. What do you feel?

A. Too bad he’s not here physically with us to enjoy this event. But his spirit is always with us.

I made his monument [she shows a photo of a sculpture depicting Paik with a violin in one hand and Buddha head in the other with TV monitors in his torso] ... It is now at my home [the apartment in New York where she spent more than three decades with Paik]. His spirit comes to the monument all the time and tells me I’m lazy and that I should work. I can’t work as much as he did. He was a really hard worker.

And his spirit is not only with me but also with all of us. You know, life is short and art is long. That’s true. Nam June’s concept and art will survive for a long time. He developed the new art related to information, communication and cultural exchanges, which are a global topic now. He influenced the people of the next generation not only in art but also in lifestyle.

You and Paik participated in the Fluxus movement, which demolished borders between art genres and even between art and non-art. It seems that is the reality these days. What do you think?

Truly. Now the art image is life and the life image is art, and certainly, now, everyone can become an artist. That’s good.

And this demolition of borders also includes borders between nations.

But sometimes I suspect that the world has turned more conservative than in the 1960s and 70s, which were the hippie times, dreaming of the borderless world and utopia.

I knew Paik only as a video artist, so I was impressed by “Robot K-456,” which he developed with a Japanese engineer in 1964. Why didn’t he continue to develop robots?

He didn’t make the same thing all the time. He didn’t like a series because he got tired it and then started on a new project. His brain was always working faster than his hands.

Paik is well-known for his use of cathode-ray tube TV monitors. He also used flat-screen TVs in his later years?

Such TV came just before he died, so he seldom used it.

Nam June was active in the period of boxy analog TVs. So he would make video sculptures with them, making the best use of their volume. Also, he would open the back part of TVs and change them to create works of art. It would be impossible to do that with flat-screen TVs.

I think he was born at the right time, not too early, not too late.

You are also an important artist. You said in your book that Paik was even jealous of your works inspired by French artist Marcel Duchamp. Were you ever jealous of him?

Oh, I was always jealous of Nam June. First of all, he invented video art.

And people surrounding us kept asking me, “Oh you’re an artist, too?” And I answered, “Of course I am.”

It was not easy to live as the wife of a great artist and be an artist myself. I had to use whatever materials Nam June did not use. And, while Nam June’s works were spectacular, my works tend to be personal and delicate - so they could be easily overshadowed by his works. Still, I have worked hard to be an original and good artist.

At the same time, I supported him. Nam June was really a hard worker, so I couldn’t help him. In addition, he was alone. His family was in Korea. He had friends, but you know a friend is just a friend.

I heard you admire Duchamp. So if Duchamp had been your age, whom would you have chosen as your lover: him or Paik?

Oh, I heard Duchamp liked only rich women ... On the other hand, Nam June didn’t like rich women and was never interested in being rich himself. He would say that if he had lots of money, he wouldn’t be an artist. So he insisted on remaining the most starving artist in New York.

I think he was so indifferent to money because he had already seen so much of it when he was young.