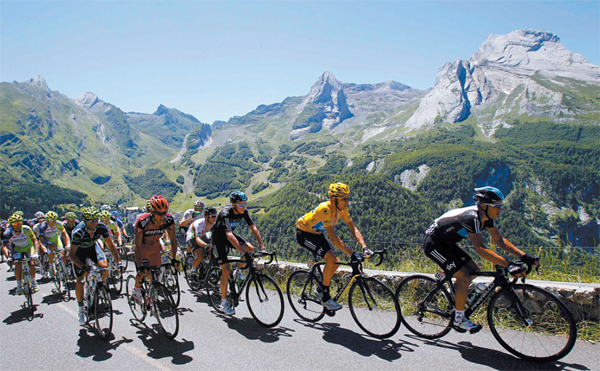 Sky Procycling rider and holder of leader’s yellow jersey Bradley Wiggins of Britain, second from right, cycles ahead of riders in the Pyrenees mountains during the 16th stage of the 99th Tour de France cycling race between Pau and Bagneres-de-Luchon, Wednesday. [REUTERS/YONHAP]


BAGNERES-DE-LUCHON, France - Defending champion Cadel Evans bowed to the heat and the four Pyrenean climbs on the 16th stage of the Tour de France to surrender his crown on Wednesday.

“It’s over for the Tour victory,” admitted his BMC team manager Jim Ochowicz at the end of the 197-kilometer (122-mile) ride from Pau, won by Frenchman Thomas Voeckler.

Evans, the first Australian to win the world’s leading cycling race a year ago, lost ground on the final Aspin and Peyresourde climbs to finish nearly 12 minutes behind the day’s winner and nearly five behind Tour leader Bradley Wiggins.

Overall, he now lies seventh, 8:06 behind the Briton, far too wide a gap to bridge before the finish in Paris on Sunday.

Evans started struggling in the first-category Aspin pass, 50 kilometers from the finish, and was helped by French teammate Amael Moinard while his team director John Lelangue gave American Tejay Van Garderen the go-ahead to tend to his best young climber’s white jersey.

The Peyresroude pass, overlooking the spa town of Bagneres-de-Luchon, was even more painful for the Australian, a shadow of last year’s winner in the scorching heat.

“I don’t think it’s possible to be on the podium anymore. But there are still two of us in the top 10 and the white jersey to defend,” said Van Garderen, who now sits a spot above his leader in sixth place.

Even though Wiggins’s rivals still have a 143.5-kilometer mountain stage on Thursday to try to topple the Briton, the final podium already looks almost settled. The Tour leader, helped by second-placed teammate Chris Froome, rode most of the finale with Italy’s Vincenzo Nibali, who launched two timid attacks that the two Britons easily quashed.

“We were comfortable; I don’t think he was really going anywhere,” said Froome, who trails Wiggins by 2:05 overall while Nibali is third, 2:23 adrift.

“Tomorrow is a hilltop finish so I definitely expect some fireworks there,” he added.

The stage laurels went to Voeckler for the second time in this edition. The Frenchman, winner of the 10th stage, dropped a 38-man breakaway group on the four mountains to take over the King of the Mountains jersey.

“Today, I took it climb after climb. It was like riding four races. I’ve been riding in these mountains since I was 19, I know every inch of these climbs,” said Voeckler, who had won one of his three previous Tour stage victories in Bagneres-de-Luchon.

Fourth overall last year, the Frenchman was not even certain to ride the Tour this year after injuring his knee two weeks before the start in Liege.

He raised his arms in Luchon ahead of two of his former breakaway companions, Denmark’s Chris Anker Sorensen and Spain’s Gorka Izaguirre.

The stage started without Luxembourg’s Frank Schleck, third overall last year, who was ruled out of the race by after failing a dope test. Reuters