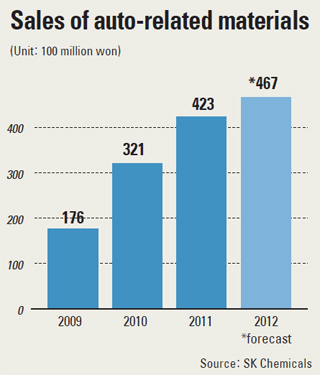 Korea’s thriving IT and automobile industries have served as life-savers for struggling chemical firms in the second quarter by feeding them much-needed business, according to local companies.

SK Chemicals said yesterday the automobile sector is becoming an alternative market for chemical firms at a sluggish time in the industry.

The company said its sales of chemical materials for vehicles jumped by 15 percent on-year to 21.7 billion won ($19 million).

It saw sales of Skynova, a sound-absorbing material used in the floor of cars and as an engine cover, grow by more than 30 percent on-year, the company said. Overseas sales accounted for 60 percent of the material’s total revenues, which stood at 14.8 billion won in Q2.

The chemical firm cited greater demand for Korean automobiles in the U.S. market as the driving force behind its recent windfall.

“Hyundai Motor and Kia Motors’ outstanding performances in the U.S. market helped our sales increase,” it said in a statement.

More than 40 percent of the company’s auto-related materials are used for representative models of Hyundai and Kia, like the Sonata and Elantra.

SK Chemicals has high expectations for this business as it sees sales of auto-related chemical materials growing to 100 billion won by 2014.

“The Korean chemical industry is suffering from reduced sales due to decreasing demand in Europe and China,” said Kim Sung-woo, a manager at the company. “However, the country’s auto industry is continuing to thrive, and is becoming an alternative market for local chemical firms.” The company has previously focused on producing plastics for consumer goods.

Recent falls in international oil prices have also squeezed chemical firms’ bottom lines. The companies usually buy crude oil based on futures prices a few months before it is released, Kim said. “We purchased oil at higher prices than they are now,” he said. LG Chem, famous for making electric vehicle (EV) batteries, announced its second-quarter performance on Wednesday.

The company said it fared well in the latest quarter, recording a 9.5-percent on-quarter increase in earnings. It registered 5.9 trillion won in sales and 503 billion won in operating profit. However, the net profit stood at 373 billion won, falling by 1.8 percent from the previous quarter.

“The launches of new electric vehicles by Renault, and the normalization of General Motors’ operation helped ramp up sales of its EV batteries,” the company said in a press release.