Ghosn expected to stir things up at ailing RSM

Ghosn expected to stir things up at ailing RSM 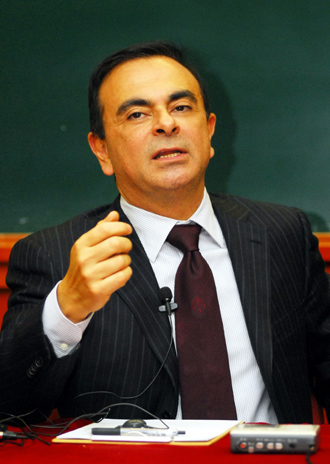 Renault Group Chairman and CEO Carlos Ghosn will visit Korea today to talk about the future plans of Renault Samsung Motors, which has been struggling with poor sales.

This is the first time since February 2008 that the 58-year-old businessman, who also heads Nissan Motor, has made an appearance in the country.

RSM said he is scheduled to visit the company’s factory in Busan and its design research center in Giheung, Gyeonggi, before holding a press conference tonight.

RSM has not provided any details about the purpose of his visit, but industry sources say that the Brazilian-born French executive is expected to reveal Renault group’s plan for supporting Korea’s fourth-largest automaker.

RSM posted a poor first-half performance this year. The Korean unit of the French automaker only sold 30,648 vehicles in the domestic market and exported 52,414 vehicles over the period, marking respective drops of 41.7 percent and 26.1 percent from the same six months last year.

To overcome its slump, Renault’s Chief Operating Officer Carlos Tavares visited Korea last month and said that RSM will launch at least one new model in 2013. He also said he plans to make Korea an export hub for the Asia region, but Ghosn is expected to deliver a more detailed plan.

According to Japan’s Nikkei business daily, Nissan Motor may outsource production of some of its vehicles to RSM.

The paper said that Japan’s second-largest auto maker has struggled with insufficient production capacity and wants to take advantage of Korea’s FTA with the European Union.

RSM has recently cut back production at its Busan plant to four days a week as its sales have dropped, but sources say that if Nissan, one of Renault’s partners, decides to give some work to RSM, the shortfall could be resolved.

According to Nikkei, Nissan can commission RSM to build tens of thousands of SUVs and other midsize and large cars a year.

Nissan already has a history of receiving sedans built by RSM and selling them in the Middle East and Africa under the Japanese auto maker’s brand.

Meanwhile, some industry pundits are speculating that Ghosn may discuss trading RSM shares with Samsung Group during his stay in Seoul. Renault Group owns an 80.1 percent stake in RSM, while Samsung controls the rest.