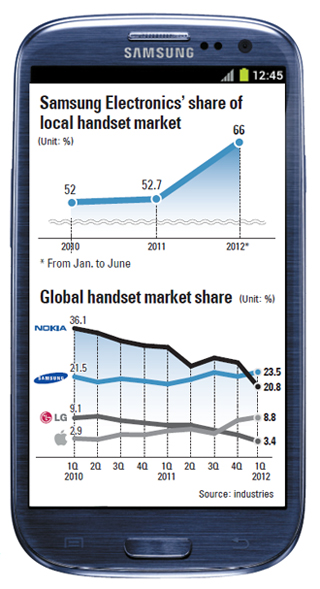 Samsung Electronics controls 60 percent of the domestic mobile phone market, a record-high share that may keep growing given the success of its recently released Galaxy S3.

This has stoked concern that the company’s quasi-monopoly could squeeze smaller domestic players, causing them to discard unpopular models and shy away from gambling on innovative new releases in a trend that threatens to kill market diversity.

“Consumers tend to get used to a company’s mobile user interface, which naturally leads them to keep buying the same company’s products,” said Park Kyung-hoon, a programmer who creates mobile apps.

Samsung’s dominance was helped by the fact that LG Electronics was a late entrant into the smartphone industry. It has been striving to redress this by forging ahead with its next-generation long-term evolution (LTE) service, but it is still playing catch-up.

Of the 1.52 million cell phones sold in Korea in April, some 970,000, or 64 percent, were made by Samsung Electronics, industry statistics show. The company also sold five million of the 7.52 million LTE-enabled mobile devices bought here in the first six months.

The latest rally started with the release of its large-size Galaxy Note last December. Prior to this, Samsung’s local market share edged up to 52.7 percent last year from 51 percent in 2010.

“As many consumers are switching over to new LTE-enabled phone, the Galaxy Note led the expansion of the LTE service market,” said an employee at Samsung Electronics. “That helped Samsung see such a jump in market share.”

The company is set to continue its rally with the new Galaxy S3. As more than 50,000 units of the handset were sold in Korea on the first day of sales, it expects to see nearly 10 million units sold worldwide by the end of this month.

“The local market is smaller than the global market, so it is too fickle to predict the exact share of the market [the company will claim], but we expect it to keep growing,” said Song Myung-seob, a researcher at HI Investment & Securities.

The telecommunication industry also fears that as Samsung Electronics wins over more consumers, it will have more leverage and bargaining power in negotiations.

“When any one company’s market share gets too big and shows signs of a possible monopoly, it gains more bargaining power,” said an employee at SK Telecom.

“So it may be better [for the mobile carriers and consumers] to keep the market competitive, rather than just have one big company. Less competition usually means fewer benefits for consumers.”

In its defense, Samsung Electronics said its high market share is a result of consumers’ choice, and that it never twisted buyers’ arms or pursued strategies to limit their choice.

According to at least one industry expert, Korea’s early adopters are so finicky, fickle and difficult to please that dominating the domestic market is a surefire indicator of success overseas. Success at home also builds trust among foreign consumers, he added.

Hyundai Motor Group, which has controlled 71.5 percent of the local auto market share on average as of May, shared the same view.

“It’s simple: No one wants to buy a product that couldn’t cut it in its home market,” said Park Min-hyung, an assistant director at Hyundai Motor Group’s communication team.

Park said the automaker needs to diversify its marketing strategies to maintain its position.